SEOUL, Feb. 7 (Yonhap) -- South Korea said Tuesday it will ease some restrictions on the ceiling of how much people can invest through crowdfuding.

Currently, the general public is allowed to invest up to 5 million won (US$4,370) per year due to the risks involved with the new type of investment mostly based on the Internet. If recognized as "accredited investors" with an annual income of 100 million won or more, they can make an annual investment of 20 million won.

Under the revised rule, approved by the Cabinet earlier in the day, those with a finance-related certificate will also be categorized as accredited investors regardless of their income level, according to the Financial Services Commission (FSC).

The new enforcement ordinance under the Financial Investment Services and Capital Markets Act will take effect on Feb. 15.

Crowdfunding refers to a method of raising funds from relatively small individual investments or contributions from a large number of people often via cyberspace. 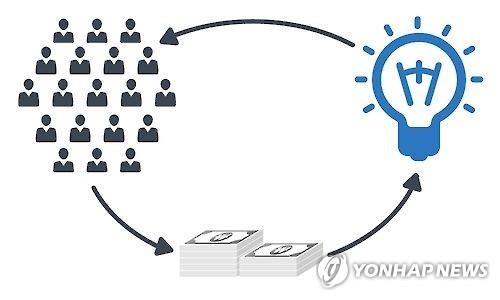 The ordinance also calls for the introduction of private equity funds (PEFs) specializing in assisting the launch of new businesses.

Such PEFs are required to invest in at least 50 percent of assets in start-ups, venture capital and other related businesses within two years after being founded.