The index for output generated in the restaurant sector came to 107.1 in December, compared to 111.1 from a year earlier. The figure represents a fourth straight month of decline, according to data compiled by Statistics Korea.

An index measuring the people's expected spending on dining out fell to 87 in January from 88 a month earlier. It is the lowest since April 2013 when the index was at 86. The development indicates that South Koreans are reluctant to spend money out of concern of a prolonged economic slowdown.

Analysts said South Korea's anti-graft law has also had a negative impact on restaurant and flower businesses. In South Korea, potted orchids had long been used as a gift for those who are promoted in companies, but the practice was affected by the law.

Taking effect in September, the law imposes tight limits on free meals and gifts that can be accepted by government officials, journalists and private school teachers to try to curb the deep-rooted tradition of excessive hospitality. The maximum value of gifts a person subject to the law can receive has been set at 50,000 won (US$44), and cash gifts for events such as weddings and funerals have been fixed at no more than 100,000 won. 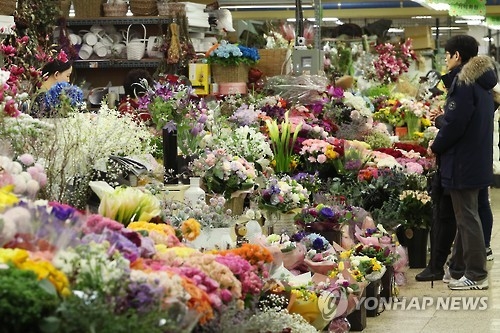