The K League Classic club said Petratos will play for them in the 2017 season, although they didn't disclose the details of the contract.

Petratos made his pro debut in 2009 with Penrith Nepean United in New South Wales, and later played for Sydney FC. He moved to Malaysian side Kelantan FA in 2012 and scored eight goals in 11 matches there.

Petratos joined Brisbane in 2013 and helped the club win the A-League, the top-tier pro football league in Australia, in the 2013-14 season. He has scored 20 goals in 120 matches in the A-League.

Petratos represented Australia at the under-17, under-20 and under-23 levels, but has yet to play for the senior side. Ulsan said the midfielder is speedy and smart, and will help the club on both offense and defense.

"I'm happy to join the team that represents Asia," Petratos said through the club. "This is also a new experience for me. I want to play in matches right away." 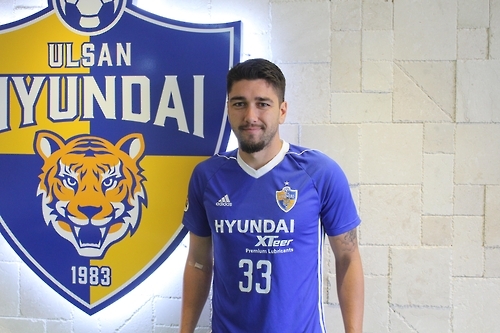 Ulsan said Petratos will fill the "Asian quota" for their squad. In the K League, teams are allowed to have three foreigners, in addition to one player from an Asian Football Confederation (AFC) member country, which is also known as the Asian quota. The two-time K League winners currently have two foreigners -- Croatian midfielder Ivan Kovacec and Austrian defender Richard Windbichler.

Ulsan, which finished fourth in the domestic league last year, will face Kitchee of Hong Kong later Tuesday in an AFC Champions League (ACL) playoff match at home. They will join Group E with a victory.

Ulsan originally didn't qualify for the premier Asian club competition. The 2012 ACL champions, however, earned the opportunity after fellow South Korean club Jeonbuk Hyundai Motors were banned from this year's competition because of their bribery scandal last year.