SEOUL, Feb. 7 (Yonhap) -- Sohn Hak-kyu, an opposition heavyweight, announced his nascent political group's merger with the liberal People's Party on Tuesday, as the presidential aspirant apparently seeks to boost his stature ahead of a key election this year.

With the merger between Sohn's group, roughly translated as the "council for people's sovereignty and reform," and the minor opposition party, he is expected to join a primary race against Ahn Cheol-soo, the party's former leader, to lock in the presidential nomination.

"Our integration is the beginning of the mustering up of reformist forces, not the end of it," Sohn said during a press conference. "Let us work together to achieve a change of government, build a new Republic of Korea and lead reform effort in this period of flux." 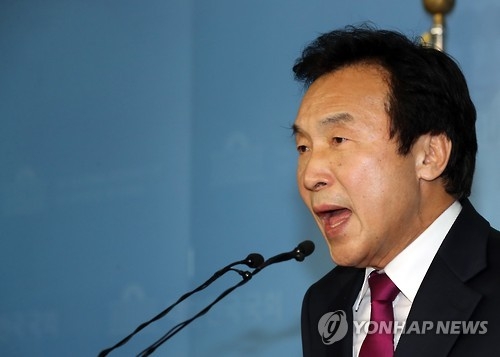 Late last month, Sohn, a former chief of the main opposition Democratic Party, launched the council, which observers said would serve as a political platform to support his potential presidential campaign.

Sohn left the Democratic Party in October -- upon his return to politics after an absence of two years in the wake of a crushing defeat in a parliamentary by-election in July 2014.

Since the launch of his new political entity, speculation had abounded that Sohn might seek to merge with a political party or form a coalition of like-minded liberal politicians to boost his presidential prospects.

During the press conference, Sohn made a thinly-veiled criticism of Moon Jae-in, a former leader of the Democratic Party who has maintained a comfortable lead in various recent polls, apparently portraying him as a leader of the "hegemonic" political forces.

"If the hegemonic forces within the Democratic Party grab power, that will not be a (genuine) change of government," he said. "That would be only a shift from one hegemonic group led by Park Geun-hye to another hegemonic group."

Sohn's council and the People's Party will soon begin talks over a set of issues related to the merger such as a possible change of the party name, Sohn said.