SEOUL, Feb. 7 (Yonhap) -- S.M. Entertainment, one of the country's three largest K-pop agencies, said Tuesday it will continue "Station," its weekly digital music release program, into season two while expanding it and making it much more comprehensive.

Home to big Korean pop acts including Girls' Generation and EXO, S.M. Entertainment launched "Station" in February 2016 as the agency then marked its 20th anniversary.

Under "Station," the company released a song each week in which its artists, often together with artists from other labels, took on creative ventures outside of their day jobs. It began with "Rain" by Girls' Generation's Taeyeon and ended its 52-week first season run via "Curtain" from Suho of boy band EXO last week.

"'Station' will continue in its second season by releasing the first track in March and present much richer and upgraded contents," the entertainment company said. 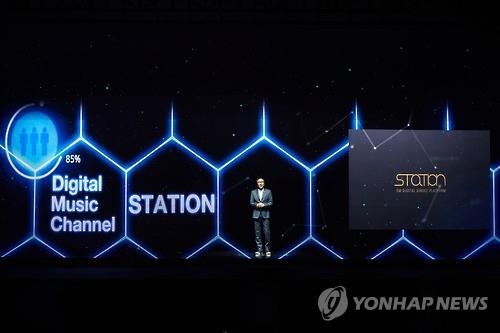 "Station" was S.M. Entertainment's answer to the growing trend in which singles or shorter EP albums, as opposed to full-length studio albums, became more critical to an artist's and label's popularity, market clout and ultimately revenue.

By mashing up talent and spreading release dates year-long, an industry behemoth such as S.M. Entertainment can better dictate or react to the latest trends through a constant salvo of releases.

At the same time, it opened its doors to competing artists, producers and songwriters. Outside big names such as Yoon Mi-rae, K.will, indie band 10cm and even comedians Yoon Jung-soo and Kim Sook were some of season one participants.

S.M. Entertainment "will move actively in the music market by releasing digital single-format music on a regular basis," Lee Soo-man, the company's chief, said during a presentation show for the "Station" project in January last year.

The new season, according to S.M. Entertainment, will be much larger in many respects. The company said "collaborations will be expanded beyond borders and go global."

Content-wise, "Station" will become much more multi-faceted. It will run genre-specific sub programs as well as separate seasonal projects aimed at the peak summer and winter vacation seasons.

"Station" will also not be limited to music but expand into drama, entertainment, talk shows and even sports through collaborations with top talents in respective areas.

The company will also operate a program called "Open Station" in which anyone can submit an artistic work or ideas through openstation@smtown.com and win an opportunity to be published. The agency hopes to search for fresh new talent through "Open Station."