INCHEON, Feb. 7 (Yonhap) -- South Korean skeleton racer Yun Sung-bin may be ranked No. 2 in the world in his sport, but he's still not pleased with what has been an inconsistent season so far.

After returning home Tuesday, however, Yun said he was "quite angry at myself."

"I don't really care if I am world No. 1 or No. 2," he told reporters at Incheon International Airport. "I only think about what I am supposed to do."

At the World Cups, skeleton standings are determined after two races. And Yun said he was particularly upset with the way he's failed to stay consistent through both of the runs.

At six of his seven World Cups, Yun posted worse times in the second race than his first one.

At four World Cups, Yun had the fastest time after the first race, but he was third, fourth, second and fifth in his second runs at those four competitions.

"I think I've been racing under the burden that I had to maintain my top spot," Yun said. "It's been due to my lack of experience."

Though he's being tough on himself, Yun remains South Korea's best hope for its first Olympic medal in a sliding event at the 2018 PyeongChang Winter Games.

The 22-year-old began this season with a bang, winning the first World Cup in Whistler, Canada, in December, while Dukurs only finished fourth.

The two have since traded places. Yun lost his No. 1 ranking with a fifth-place finish on Jan. 14 in Winterberg, Germany, where Dukurs picked up his first victory of the season. 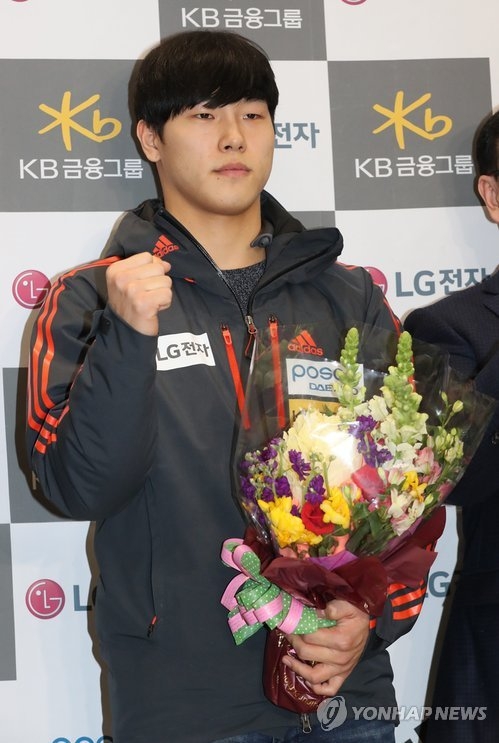 Then on Jan. 28, Yun regained his top ranking by finishing second at the World Cup in Konigssee, Germany, while Dukurs stumbled to sixth place.

Dukurs got back on top of the ranking list with a victory last weekend, as Yun finished third in the same World Cup stop in Igls, Austria.

Yun is skipping the world championships starting on Feb. 24 in Konigssee, Germany, to spend more time training at next year's Olympic course, the Alpensia Sliding Centre in PyeongChang. The eighth and the final World Cup of the season will also be held there next month.

"Since I get to train there more than others, it will help me minimize mistakes," Yun said. "At the World Cup in PyeongChang, I won't be thinking about winning a gold medal. I just want to have a strong race so that I won't have any regrets when the season is over."

Yun will most likely have to get past Dukurs to reach the podium in PyeongChang next year. Given Dukurs' shaky start to the season, there were whispers that the best days were behind the 32-year-old.

Yun said while he doesn't feel Dukurs has been 100 percent this season, "He and I have been trying some new things as we both prepare for the Olympics."

S. Korean skeleton star 'angry' at self over inconsistent season

S. Korean skeleton star 'angry' at self over inconsistent season