SEOUL, Feb. 7 (Yonhap) -- Koreans aged 45 or over are flocking to local cinemas, making up an ever-growing portion of moviegoers, data from a local cinema research center showed Tuesday.

According to the "2016 Movie Market Review," released today by CGV Research Center which analyzed the movie chain CGV's online ticket sales, the age group has taken up 20.3 percent of the total moviegoers who visited CGV last year. 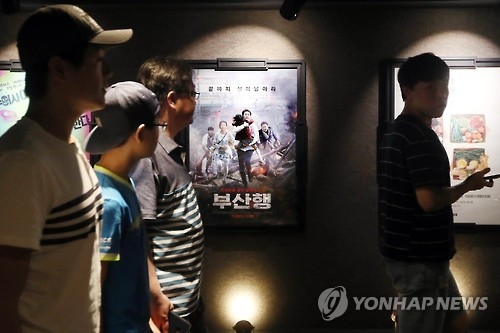 Last year, the age group watched 5.05 movies on average, higher than 4.7 movies by the wider group. It purchased an average of 2.16 tickets, also bigger than 2.01 tickets by younger people.

The data showed there were differences in preferred time slots and movie types depending on age.

It turned out that people aged 45 or over like watching a film during the daytime on weekdays and mornings on weekends when a movie ticket is relatively cheap. They preferred popular movie series and American blockbusters such as "Rogue One: A Star Wars Story," "London Has Fallen," "The Revenant" and "Spectre."

"Korean filmgoers in their 20s and 30s are still a major group in the local movie market," said Lee Seung-won, head of the center.

"But as older people have came to the fore, the film industry should pay more attention to them and devise smarter marketing tactics tailored to the group."