The two sides were tied at 1-1 after 120 minutes of action at Munsu Football Stadium in Ulsan. With the hosts leading the penalties 4-3, Ulsan goalkeeper Kim Yong-dae denied Kitchee's fifth kicker Fernando and sent the K League Classic club to the 32-team group stage of the Asian Football Confederation (AFC) Champions League.

The hard-earned victory gave Ulsan a place in Group E, where they will meet Kashima Antlers of Japan, Muangthong United of Thailand and the playoff winner between Shanghai Shenhua of China and Brisbane Roar of Australia.

Ulsan will be in the group stage for the first time since 2014. They previously won the AFC Champions League (ACL) in 2012.

However, Ulsan were given a playoff spot after defending champions Jeonbuk Hyundai Motors' expulsion for this year's ACL following their bribery scandal involving a scout and referees. The Entry Control Body, a judicial body independent of the AFC, last month banned Jeonbuk from the ACL because of their "indirect involvement in activities aimed at arranging or influencing the outcome of matches."

The decision allowed Jeju -- which first earned an ACL playoff spot after finishing third in the K League Classic -- to take Jeonbuk's place in Group H and Ulsan to enter the playoffs in Jeju's stead. 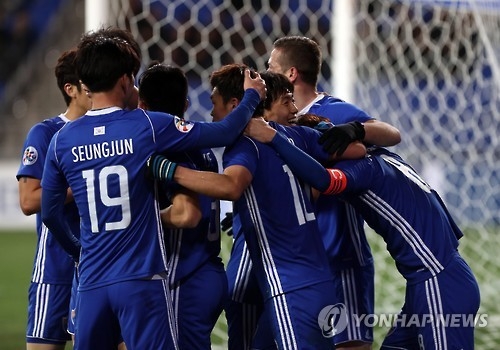 Ulsan, having their first official match under head coach Kim Do-hoon, failed to unlock Kitchee's tight defense in early first half. Their first shot came in the 21st minute when Croatian midfielder Ivan Kovacec fired a right-footed attempt that was blocked by a defender.

The hosts then had a promising free kick opportunity in the 36th when team captain Kim Sung-hwan was brought down by Krisztian Vadocz outside the box. Han Sang-woon's left-footed effort, however, sailed wide.

Just when the first half entered stoppage time, Kim Sung-hwan directed a right-foot shot into the top right corner to give Ulsan a 1-0 lead.

Ulsan made three substitutions in the second half, trying to get the winner. However, the South Korean side failed to beat Kitchee goalkeeper Wang Zhenpeng during the rest of regulation and four minutes of stoppage time.

Kitchee, looking for their first ever ACL group stage appearance, made their first substitution in the first half of extra time. The visitors shocked home fans in the 99th when their Brazilian forward Sandro hit the left post with his right-footed effort inside the box.

Ulsan answered back two minutes later with Kovacec's left-footed strike that stung the palms of Wang.

In the second half of the extra period, Ulsan dominated ball possession, while Kitchee stuck to their counter-attack tactics. Han Sang-woon had a promising chance in the 116th after a corner kick, but his right-footed shot went over the net.

In the penalties, Ulsan gained the lead first when Kovacec scored first and Kitchee's Alex sent his spot kick over the net. However, the score turned 1-1 when Wang denied Ulsan's second kicker Lee Ki-je and Kitchee's Sandro made his kick.

The kickers from each side were successful with their chances, as Ulsan built a 4-3 lead. Then Fernando, Kitchee's fifth kicker, failed to convert his spot kick against Kim Yong-dae and handed Ulsan the victory. 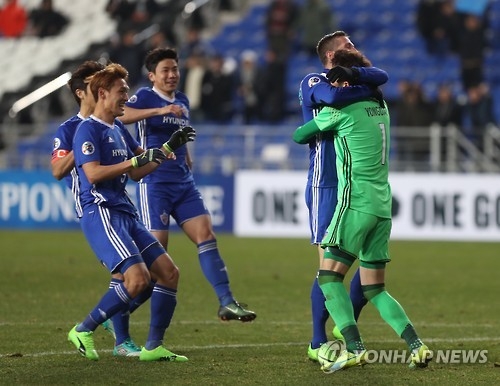 Ulsan head coach Kim Do-hoon said he'd expected that his side would have a tough time against Kitchee because they couldn't prepare for the season as planned. Ulsan had to cut their overseas training short for the ACL playoff following Jeonbuk's expulsion.

"Although we were considered a stronger team than the opponent, I knew we would have a difficult time," he said. "We couldn't execute what we had planned."

When asked about his Ulsan managerial debut, Kim said he is satisfied only with the final result, but his team will make progress.

"There'll be some tough stretches when we start the season," he said. "But we still have to prove ourselves on the pitch. We will try to show a better performance next time."
(END)