White House press secretary Sean Spicer made the remark at a regular briefing, recalling a phone conversation that Trump had with Acting President and Prime Minister Hwang Kyo-ahn last week.

"He had a conversation the other day. We look forward to fulfilling that conversation," Spicer said.

"I think obviously the threat of North Korea is the most prominent issue that faces South Korea and our alliance right now. He wants to reassure the South Korean government, the Blue House, that we're going to do what we can to make sure that we stand with South Korea and that we prevent any further hostile actions from North Korea," he said. "So I think the safety of our country, of South Korea, of the region are going to be clearly the greatest focus of this." 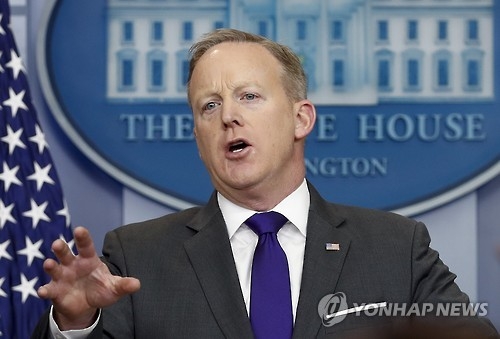 During the Jan. 29 phone call, Trump reaffirmed the U.S. "ironclad commitment" to South Korea's defense, including through the provision of extended deterrence, using the full range of military capabilities, the White House said in a statement at the time.

The two leaders also agreed to take steps to strengthen joint defense capabilities to defend against the North.