The repercussions have been far-reaching with mass protests breaking out across the nation and around the world to challenge what some see as a direct threat to the very foundations the United States was built upon.

Even after a judge's temporary lifting of the ban last week, Cho Maria, a South Korean lawyer working in New York, said she felt the message sent to immigrants was clear.

"The message that I think immigrants, including Korean immigrants such as myself, keep getting is that despite the fact that we are contributing members of the community, holding down steady jobs and paying taxes and although we consider the United States home, we're just not welcome -- that we're somehow taking away what Americans deserve," she told Yonhap News Agency during a recent visit to Seoul.

The 32-year-old moved to New York 10 years ago to attend graduate school and later obtained an H-1B visa for highly skilled foreign workers. Although her family and friends have reassured her that South Korea is unlikely to become a target of Trump's ever-expanding anti-immigration rhetoric, and now policy, Cho said that hasn't stopped her from contemplating her future in the Land of the Free.

"If the administration continues with its divisive anti-immigrant agenda, it will definitely impact whether I want to remain in the United States long term, and I'll need to consider returning home," she said. "I'm pretty fortunate I can say that though. I'm sure for many, it's not an easy choice." 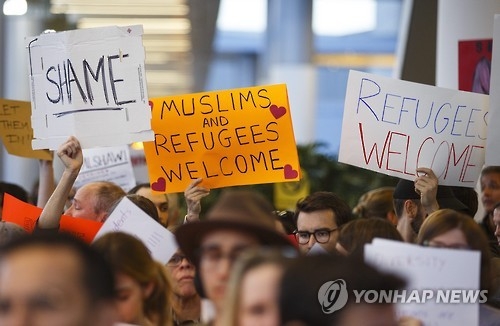 Byun Eurah, a 27-year-old South Korean working in retail in Ohio, echoed those concerns even as she tried to place the immigration ban in a wider historical context: the Irish, the Italians, the Chinese and the Japanese were all chastised when they began resettling in the U.S. in large numbers.

"From this point of view, the Muslim ban is just another hiccup in world history, but it doesn't stop me from fearing for my family who are currently green card holders," she wrote in an email to Yonhap. "How quickly, swiftly and almost dismissively Trump and his administration wrote and signed the Muslim ban makes me worry about what may be coming in the future."

Such worries are hard to dismiss. According to a report by Bloomberg, the Trump administration is preparing a new executive order that aims to limit the H-1B visa program and encourage businesses to employ more Americans.

Many Koreans here have been quick to react to the developments and sought counsel from agencies facilitating Koreans' studies abroad. Koreans who move to the U.S. to study often hope to eventually find a job there.

Bae Il-yong, who heads the Yu-myung Education Agency in southern Seoul, said his industry has been on high alert ever since the new measure was announced.

"Of course we're nervous because it's directly linked to our business," he told Yonhap by phone. "But those who go overseas to study don't decide to do so suddenly. It takes them at least two to three years, so they don't change their plans because of (the ban)."

Last year South Korea was the fourth-largest sender of students to the U.S. after China, India and Saudi Arabia, according to the International Institute of Education based in New York. There were more than 61,000 Koreans making up 5.8 percent of total international student enrollment in the country. 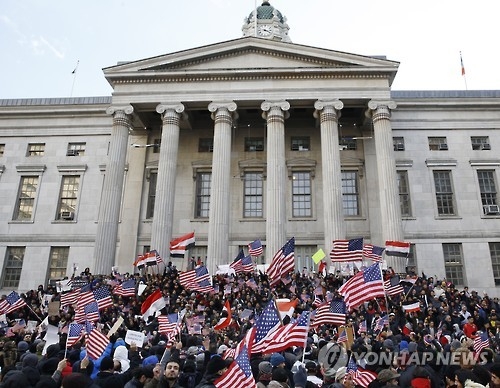 As Bae pointed out, Trump would be making a "mistake" to squeeze this lucrative market of 6 to 7 trillion won (US$5.2 to 6.1 billion) in spending by Korean students and their family members per year.

Lee Noah, a Korean graduate student in New Jersey, recently received two emails from his university seeking to reassure members who may be affected by the executive order.

While offering the support students may need, it also "strongly advised students and scholars who might be affected and who have travel plans in the coming days to defer travel outside of the United States until there is some clarity and legal analysis of the situation or, if they must travel, to seek legal counsel before they do."

Lee said the Koreans around him don't appear too worried yet.

"Still, it will probably take longer to clear security and passport control. As if it doesn't take long enough already," he said.

In response to a query from Yonhap, the U.S. Embassy in Seoul said it has yet to receive questions from the Korean public regarding the ban.

"U.S. visa processing is proceeding normally in South Korea. We welcome all prospective applicants who require visas to visit our website and to schedule an appointment," it said. 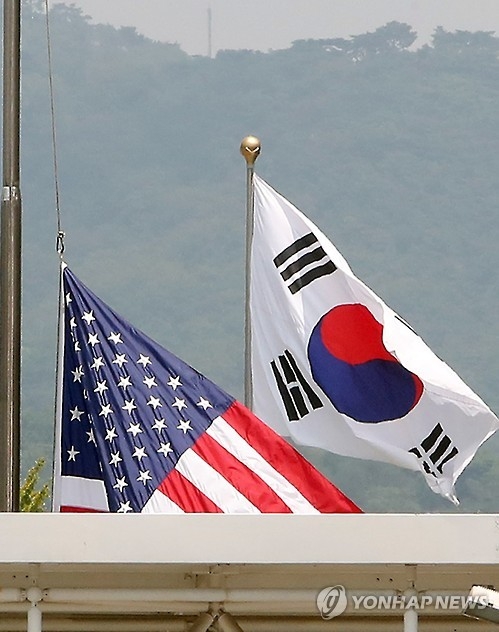