SEOUL, Feb. 8 (Yonhap) -- Eland Cruise, which runs a cruise tour on the Han River in Seoul, has indefinitely suspended the operation of its four ferries amid safety concerns, the company said Wednesday.

"(We) have decided to stop the operation of all cruise ships starting on Feb. 8 in order to secure their safety during the winter period," it said on its website.

It stressed that the move is not because of any "big safety problem" in connection with the service, saying it's meant to scrutinize any possible hitch.

Earlier this week, a local news outlet reported that Eland had operated a ship with a damaged screw for five months and installed chairs in a standing room without a permit from the authorities for a buffet service.

Eland said it will resume the ferry operation after confirming that there is no problem in the ships via outside experts and an inspection agency with public confidence. 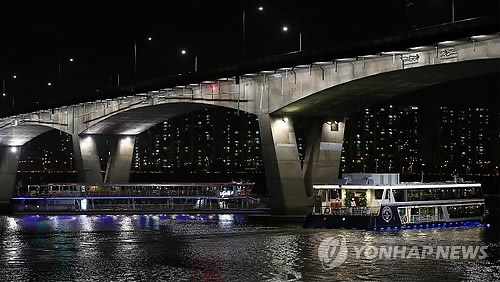