SEOUL, Feb. 8 (Yonhap) -- Acting President and Prime Minister Hwang Kyo-ahn on Wednesday called for "swift and bold" quarantine and sterilization efforts to contain the outbreak of foot-and-mouth disease that hit the country this week.

During a daily meeting of government officials and experts on the disease and avian influenza, Hwang also ordered a thorough, scientific analysis of the origin of the disease, noting that the latest cases occurred even though cows in the affected regions had been vaccinated.

"We have to make all-out efforts to prevent the spread of the disease by taking thorough initial quarantine steps such as vaccinating all cows across the country and banning the movement of all livestock (in affected areas)," he said. 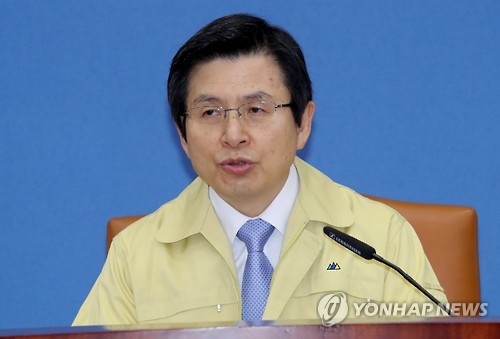 "Foot-and-mouth disease, in contrast to avian influenza, does not affect human beings, but the initial quarantine efforts must be swift and bold, and the authorities must deal with this thoroughly, immediately and proactively," he added.

The acting president also called for seamless cooperation among central and provincial governments in stemming the spread of the animal epidemic.

Right after the first outbreak, the authorities imposed a ban on the movement of all livestock and farm vehicles across the nation for 30 hours. Also, the government has decided to vaccinate about 102,000 cows and pigs in the country within this week.