SEOUL, Feb. 8 (Yonhap) -- A series of animal and poultry disease outbreaks in South Korea is feared to be a huge drag on the country's exports of meat and other livestock products, industry sources said Wednesday.

In recent years, the foot-and-mouth disease (FMD) has broken out frequently in South Korea and the country lost the status of an FMD-free nation, while a fresh outbreak of the disease was confirmed at cow farms in early February.

At the same time, the country has been suffering from a rapidly spreading outbreak of avian influenza for months, with about 30 million chickens and ducks culled.

Consequently, its exports of fresh meat are forbidden in principle, but the Seoul government signed separate deals with some countries like Hong Kong to export livestock products.

Nearly all South Korean beef products are exported to Hong Kong, which imported 46 tons of Korean beef worth US$3.2 million last year.

However, the recent infection of the foot-and-mouth disease is expected to deal a further blow to the country's outbound shipments of beef. 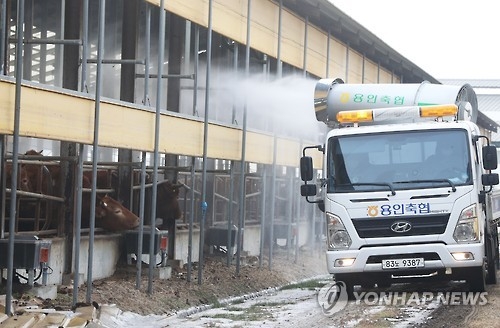