"The opening of the joint office will not only help the two countries exchange views on pending issues during the KF-X project but also allow them to effectively fine-tune differences," Jung Kwang-sun, director general for the KF-X Program Group at the Defense Acquisition Program Administration (DAPA), said in a statement.

The office will open in Sacheon, 437 kilometers southeast of Seoul.

Seoul and Jakarta signed an 8.1 trillion-won (US$7.1 billion) deal to jointly develop the KF-X/IF-X 4.5-generation fighter in January last year, with the latter investing 1.7 trillion won for a 20 percent stake in the project.

South Korea's military requires more than 100 KF-Xs, while Indonesia needs at least 50 IF-Xs. There will be minor differences in operating systems between the two, official sources said.

Once they become operational, the KF-X fighters are to replace South Korea's F-4 and F-5 jets. The 16-meter next-generation fighter is being built to reach speeds of up to Mach 1.97, or 2,411 kph. It can carry more advanced radar systems and electronic equipment compared to KF-16.

Seoul has beefed up its defense capabilities to better counter North Korea's nuclear and missile threats in the past decade. Last year alone, Pyongyang conducted two nuclear tests and a series of ballistic missile launches. 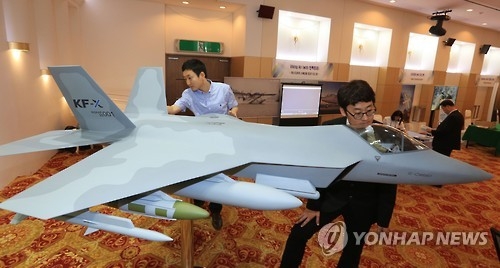