"Coming up with measures to ride out deteriorating trade environments should be the government's top priority," BOK Governor Lee Ju-yeol said in a meeting with trade experts and professors. 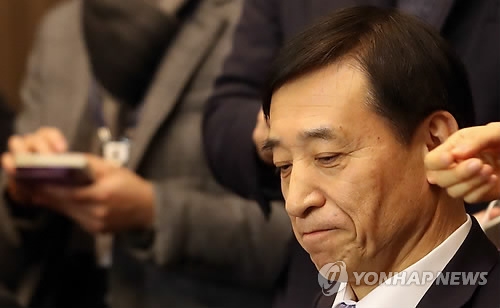 His comments underscored worries that growing protectionism of the new U.S. government could hurt South Korea's exports, which in turn could drag down the country's economic growth.

South Korea's exports accounted for 42.2 percent of the nominal gross domestic product during the first nine months of last year. The U.S. is South Korea's second-largest trading partner after China.

Recently, U.S. President Donald Trump signed an executive order pulling out of a 12-nation Asia-Pacific free trade pact, known as the Trans Pacific Partnership. Also, during his campaign, Trump named free trade deals as a key cause of job losses and other American economic problems. His protectionist stance caused concerns in South Korea over any possible impact on the Seoul-Washington free trade deal, better known the KORUS FTA.

Asia's fourth-largest economy posted US$23.3 billion in trade surplus with the U.S. last year, accounting for 26 percent of the country's total trade surplus.

Its exports rose 11.2 percent year-on-year to US$40.3 billion in January. It is the first time since January 2013 that the nation's exports have posted double-digit growth. Also for the first time in 33 months, exports expanded for three months in a row.

The upturn has fueled expectations of a recovery in exports.