SEOUL, Feb. 8 (Yonhap) -- The leaders of three opposition parties on Wednesday called on the Constitutional Court to speed up impeachment proceedings against President Park Geun-hye to ensure a ruling is made before another justice retires next month.

After a three-way summit, they also demanded Acting President and Prime Minister Hwang Kyo-ahn extend a special prosecutors' probe into the presidential scandal, which expires late this month.

There have been growing concerns about a possible delay in the court's decision, after the top court on Tuesday scheduled additional hearings through Feb. 22 -- a decision that effectively precludes a ruling within this month.

"Now is the time for the three opposition parties, which led parliament to approve the impeachment motion, to put their heads together and make all-out efforts to achieve (a ruling in favor of) the impeachment," Rep. Choo Mi-ae, chief of the main opposition Democratic Party, said during the meeting with Park Jie-won of the People's Party and Sim Sang-jeung of the Justice Party at the National Assembly.

"That is the way to uphold the citizens' order and execute the candlelight protesters' order," she added.

They urged the court to make its ruling before March 13 when acting Chief Justice Lee Jung-mi is set to retire. Her absence will create a second vacancy on the nine-member bench. Lee took over from Park Han-chul, who retired last month.

The top court must rule by early June over whether to unseat or reinstate the president who was impeached in December over a corruption scandal involving herself and her confidante Choi Soon-sil. At least six justices have to uphold the impeachment to remove Park from office.

During their meeting, the leaders also urged Acting President Hwang to approve the extension of the special prosecutors' mandate.

The ongoing investigation, led by Independent Counsel Park Young-soo, is due to end on Feb. 28. It can be extended once by a month with consent from the acting president. 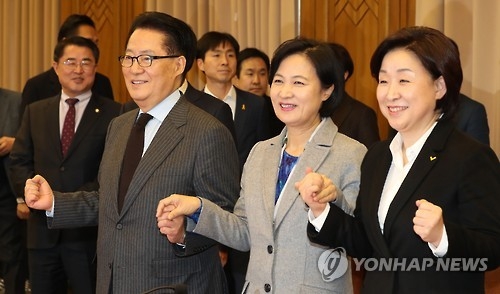