The singer, selected as the local ambassador for the French-Canadian film, on Tuesday met with fans at CGV-Yeongdeungpo in western Seoul. She held a Q&A, gave out autographed posters, and took selfies with fans.

Kim was chosen as the movie's ambassador for her striking resemblance to the main character Felice. Similar to the lead -- a highly determined orphan-turned-ballerina who never loses hope even when facing mounting odds -- Kim, who received low scores during her first singing auditions, overcame all obstacles to become part of I.O.I.

The group made its debut through Mnet's hit idol audition show "Produce 101" in May 2016. Among 101 trainees who battled for the top spots from various entertainment companies, 11 emerged victorious. Kim finished in fifth place.

I.O.I was a one-year project group that soared to the top of the K-pop charts with two EPs and an additional subunit single. The group's concert in January marked its last group performance on stage.

After the group's disbandment, Kim has been involved in various entertainment activities. She joined Bae Sung-jae's "Ten Radio," a K-pop music radio show on SBS, as a regular member.

She also appeared in various music videos, including The Ark's debut single "The Light," and was a regular host of variety shows "Star Show 360" and SBS' "Game Show Yoo Hee Nak Rak."

She also opened a coffee shop in southern Seoul where she and her agency can connect with fans. In March, the singer, who originally trained to become an actress before changing careers, will be making her acting debut with the TV series "First Love."

"Ballerina" will premiere in local theaters on Feb. 9. 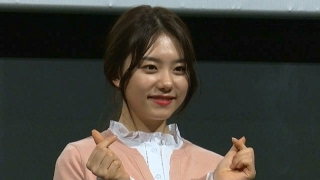