Another aide to Park said, "If the independent counsel continues to leak content related to the questioning of the president, all mutual agreements reached will be rendered null and void."

Later in the day, the probe team confirmed that the questioning will not take place Thursday, saying it will reveal further details during a regular press briefing scheduled on the day.

An aide to Park said the questioning is likely to take place next week at the earliest, while denying speculation that the president is trying to avoid the interrogation.

Special prosecutors have been accelerating their probe into the high-profile corruption scandal involving the president and her longtime friend Choi Soon-sil, with their initial investigation period set to expire on Feb. 28. The period can be extended once, by a month, with consent from Acting President and Prime Minister Hwang Kyo-ahn.

On the same day, the investigation team raided the home of Kim Hack-hyun, former vice chairman of the Fair Trade Commission (FTC), and questioned him over the controversial merger of Samsung Group's two affiliates in 2015.

The country's largest business group is suspected of giving bribes to Choi in return for the state-run pension fund's backing of the merger between Samsung C&T Corp. and Cheil Industries Inc.

Investigators suspect that the presidential office also pressured the FTC to give favors to the conglomerate in the process. 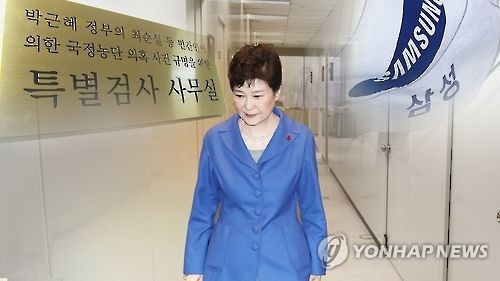