SEOUL, Feb. 8 (Yonhap) -- South Korea is in the home stretch toward its first hosting of the FIFA U-20 World Cup, with a focus on promoting the tournament over the next 100 days.

The U-20 World Cup will be played from May 20 to June 11 in Cheonan, Daejeon, Incheon, Jeju, Jeonju and Suwon. The draw of the competition that features 24 nations is slated for March 15.

South Korea is the third country, along with Mexico and Japan, to have hosted all major FIFA men's tournaments, with the 2001 Confederations Cup, the 2002 World Cup and the 2007 U-17 World Cup.

With the countdown to the competition reaching 100 days Thursday, local organizers said they are pushing up their preparations, which are in the final stage.

"Football is not just a sport; it's becoming a huge industry," Korea Football Association (KFA) President Chung Mong-gyu, who is also the chief organizer of the U-20 World Cup, said Wednesday. "The country is dealing with some political and social issues recently, but the World Cup is a very important tournament."

Chung said football fans will have a great opportunity to see the world's top prospects perform. 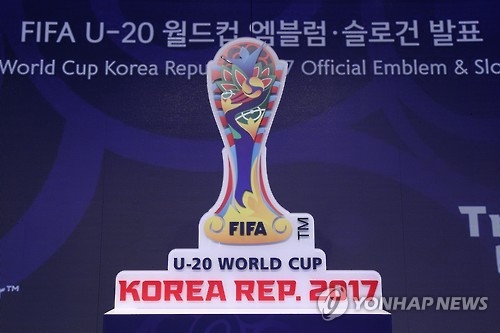 To check their operational readiness, the organizers will host a test event from March 25 to 30. The four-nation tournament will be held in Suwon, Cheonan and Jeju.

The stadiums are currently going through renovations, the organizers said.

"The preparations for the tournament are more than 90 percent complete in almost all areas," said Kwak Young-jin, vice chairman of the local organizing committee. "What we are now working on is how to encourage fans' participation and link that move to ticket sales."

Kwak said ticket sales for South Korean team matches are going well and seats for other matches will be sold mostly after the group draw.

"Officials from municipal governments are working very hard to promote the tournament," he said. "As for the marketing activities, there seems to be some impact from the country's recent situation (regarding an influence-peddling scandal involving President Park Geun-hye), but overall, there are no big problems."

At home, South Korea will look to repeat their success from 1983, when they reached the semifinals in Mexico.

The young national team had a bumpy road last year. South Korea got eliminated in the group stage of the Asian Football Confederation U-19 Championship and that resulted in the departure of head coach An Ik-soo.

Just six months away from the tournament, South Korea appointed Shin Tae-yong, who led the national team at the Rio de Janeiro Olympics, to be their skipper for the U-20 side.

Shin has tested more than 30 players since then, including FC Barcelona youth members Lee Seung-woo, Paik Seung-ho and Jang Gyeol-hee. His squad on Tuesday returned home after training in Portugal for three weeks.

In Portugal, Shin's side had five friendly matches, of which they won two, drew two and lost one. 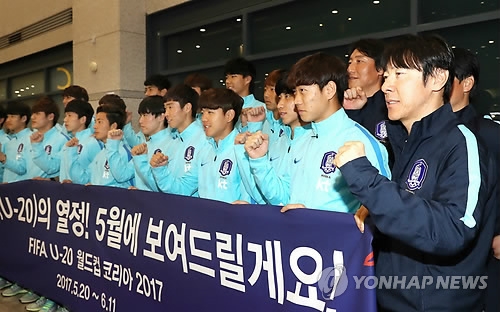 "We built the basic strategy for the team through training in Portugal but still there are things we need to improve on," Shin said. "Since the World Cup is at home, we will try to give our utmost effort to satisfy fans here."

Shin said he will select the final 21 members for the tournament after testing some players at the friendly tournament next month. The coach said he will bring 23 to 25 players into their final training session in April, so that the players can stay alert until the final entry is confirmed.

So far, 13 countries have qualified for the U-20 World Cup. South Korea will represent Asia, along with Iran, Japan, Saudi Arabia and Vietnam.

The U-20 World Cup will have six groups of four teams. The top two teams from each group advance to the next round, along with four third-place teams.

"Young footballers can have a sudden change in their performance in such a short period of time," said Cha Bum-kun, a South Korean football legend who is also serving as vice chairman of the local organizing committee. "Around this time (with the tournament on the horizon), coaches should encourage the players and boost their confidence in their abilities."