SEOUL, Feb. 8 (Yonhap) -- South Korean men's short track speed skaters were shut out of a medal at the 2014 Sochi Winter Olympics -- only the second time the country failed to reach the podium in men's events since short track became a medal sport in 1992.

And when the next Winter Olympics takes place on home ice in PyeongChang next year, they're determined not to let that happen again.

The countdown to the first Winter Games to be held in South Korea will reach one year Thursday. At a press conference Wednesday marking that occasion, the men's national team skaters said they want to do their home crowds proud.

"This will be the first Winter Games in our country, and it's going to be a dream come true for all of us," said Lee Jung-su, the 27-year-old captain for the men's team. "I think the biggest home ice advantage will come from our fans and their raucous support. We'll be able to feed off that."

Lee and his teammates still have to clear a few hurdles. They have the Asian Winter Games coming up next week in Sapporo, Japan, and Lee said he hopes strong showings there will have positive carryover effects on PyeongChang. 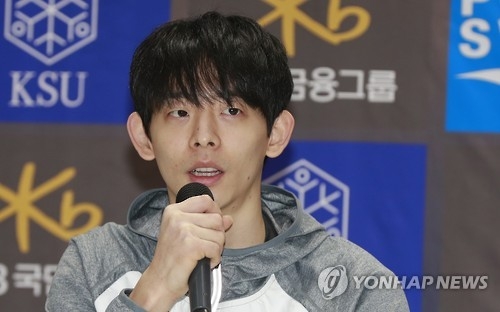 Lee won two gold medals at the 2010 Vancouver Olympics, but struggled mightily in ensuing seasons. He missed out on the national team for the Sochi Olympics, and even dabbled at speed skating. Lee has since turned his career around in his original sport, and is currently No. 2 in the world in the 1,500m.

"It was quite tough for about six years after Vancouver," Lee said. "But I am working hard to make sure I won't make the same mistakes this time around."

Sin Da-woon, a member of the disappointing 2014 Sochi team, said he still regrets his mishaps from three years ago, but he's become a better skater for them.

Sin won the world overall championship in 2013, the year before the Olympics, and it actually might have been the worst thing that could have happened to him.

"I was the world champion the season before the Olympics, and I think I got a little cocky and arrogant," said Sin, who was disqualified in the 1,000m final and finished 10th in the 1,500m in Sochi. "After that, I changed my whole approach to training, and came back stronger the following season. I am a stronger skater now than before."

Kim Sun-tae, coach of the men's team, said the futility has a great deal to do with the emergence of other nations and the growing parity in the sport.

"Our skaters are as determined and driven as ever, and I have no doubt that they will overcome adversity," Kim said. "Short track is such a difficult sport to predict, and I think skaters from other countries have improved so much. I know we keep hearing about how disappointing we've been, but we hope to be smiling when all is said and done next year."