The number of Koreans who traveled abroad rose by an average annual growth rate of 10.4 percent to 19 million in 2015, from 12 million in 2011, the Ministry of Culture, Sports and Tourism said in a report submitted to Rep. Yeom Dong-yeol of the Saenuri Party.

In comparison, the number of Koreans who went on vacation in the country increased by an average annual growth rate of 1.8 percent to 38 million in 2015, from 35 million in 2011.

Last year, a total of 22.38 million Koreans left the country for vacation. 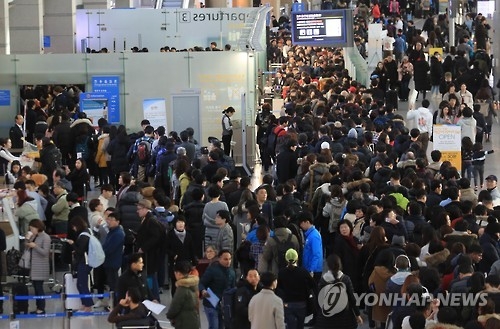 Yeom called for the government to come up with measures to boost domestic tourism.

To encourage people to spend more on domestic tourism, the ministry has developed a variety of tour packages.

If spending on domestic tourism rises by 5 percent, it will result in 1.2 trillion won worth of domestic consumption, according to a report by the Korean Institute for Industrial Economics & Trade.
(END)