SEOUL, Feb. 9 (Yonhap) -- When Kim Joo-young entered Ewha Womans University in 2011, she didn't imagine she would still be on campus six years later. She expected to have already graduated, landed a well-paying job and started to build a promising career following four years of study.

That dream is two years behind schedule, and she might need even more time to reach it. Knowing that her attempt to get a job at a financial firm fell through in late December, the 26-year-old grudgingly decided to put off graduation once again, unsure when she will be able to leave school once and for all.

"I was supposed to leave school in early 2015 since I completed all required credits but couldn't after failing to get a job. I will defer graduation once again this year," Kim said in a recent interview with Yonhap News Agency.

"I don't want to give up all the benefits that I could enjoy while on campus, such as the programs and information sharing intended to help you get a job. Once you leave, you cannot have it," she added, asking for an alias to be used.

Delaying graduation might not be a new thing, but a growing number of students are holding off on their departure even after their time is up in school.

In a poll recently conducted by the job search portal JOBKOREA, around 3 out of 10 senior students in the country's four-year universities said that they will not graduate this year. The figures would be much higher if those who deferred graduation for multiple years were also included.

"As for our department and especially for women, it has become a rarity to graduate in four years. Those who haven't graduated yet like me for multiple years make up around 30 percent of the student body," Kim said. 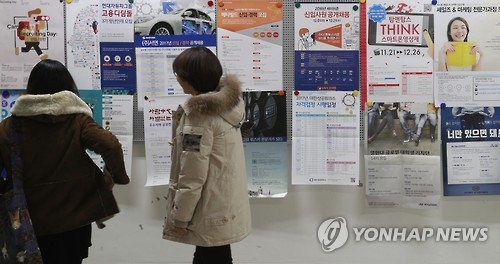 The No. 1 reason was to get more workplace experience, such as doing internships, which are necessary for their resumes. They also want to avoid "being left out" and raise their chances of getting a job by using the protection and benefits only available for those staying on campus.

Behind the growing number of the "no graduation" people is the almost frozen job market they will likely face once they leave school.

According to government data, South Korea's jobless rate stood at a six-year high of 3.7 percent in 2016. Youth unemployment was nearly three times higher than that, with the jobless rate for those aged 15-29 at an all-time high of 9.8 percent.

That translates into around 435,000 young people without jobs.

Adding to the lack of jobs, large businesses tend to prefer enrolled students to graduates in recruiting new workers, a practice which was cited as a major factor that pushes people to defer leaving school.

Lee Min-ok, an economics major in Seoul's Sogang University, is also one of the staying-on-campus jobseekers.

She was supposed to graduate in early 2016 but decided not to. She made a decision to put off graduation another semester after her 30 attempts to get a job last year didn't pan out.

"I have all the required credits, but I recently signed up for a couple of more to put off graduation for another semester," she said, asking for an alias to be used.

"This costs me money, of course, but I had no other choice since I need more time. I will spend my time until the summer doing something that I can put on my resume," she added.

Unable to find a job might be just the start of the hill lying ahead for many youngsters.

With uncertainty lingering over when they can start to get a monthly paycheck, many sadly joked that it has become a luxury to expect to buy a house, get married and have babies, at least some of which used to be something that their parents took for granted. The frustration has reached a point where some even liken their lives in Korea to hell. 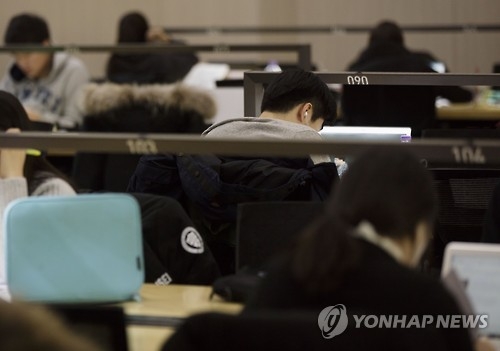 Hyun Young-eun, an official of JOBKOREA, said that she can sympathize with what they are feeling right now.

"I understand why young people complain that they are living in hell. Imagine you cannot find a job no matter how hard you try, it must be hell," she said. "The difficulty in getting a job in Korea makes many youngsters even consider emigrating to other countries."

More frustrating is that the outlook for employment will not likely be any better going forward.

Cloudy business and political instability at home caused by the leadership vacuum following the impeachment of the president and stepped-up competition abroad seem to be holding back businesses from employing new workers.

"I graduated from school in the 1990s, when things were not as bad as right now. If we had internships at the time, around 70 percent of us got regular jobs, which means at least we had a chance," Hyun said. Now it seems that even the opportunity is not there for younger people now."

The government has called for the business circles to ramp up employment to tackle the unprecedentedly high jobless problem among younger people.

Its projection, however, painted a gloomy picture, saying that the employment planned by firms with 300 workers or more will likely shrink 8.8 percent on-year during the first quarter when a large number of college students will likely rush to the job market after graduation.

"I am worried that this would be a huge challenge for our young jobseekers, including those graduating in February," Labor Minister Lee Ki-kweon said in a meeting with business leaders in mid-January.

"The current youth unemployment problem could result in a human resources drought in the future, making both our society and economy pay a huge price later on," he warned.

Unsure about when her yearslong job search will end and also concerned that things might get worse down the road, Lee of Sogang University said that she sometimes regrets deferring graduation in the first place.

Ironically, she said that the decision aimed at increasing her chances to get a job appears to be backfiring by shutting the window of opportunity fast.

"As I have failed to get a job repeatedly, I am afraid now that I might have missed the timing for getting a good job," Lee said.

"If I go back in time, I would try much harder to graduate as fast as possible. I spent a lot of time preparing for work and getting the experience necessary for my future job, but in hindsight, it would have been much better to complete my courses and leave school faster."