SEOUL, Feb. 8 (Yonhap) -- South Korea and the United States are expected to conduct a joint military exercise next month, as though a U.S. missile defense system that will be installed here sometime this year is already in operation, military officials said Wednesday.

In the Key Resolve and Foal Eagle exercises, each a command post-based and field training war game, the allies may carry out a command post-based exercise on the basis that the Terminal High Altitude Area Defense (THAAD) is operational, a defense ministry official told Yonhap News Agency.

Last week, U.S. Defense Secretary Jim Mattis and Defense Minister Han Min-koo agreed to conduct large military exercises as a deterrent against nuclear-armed North Korea. The North views the annual drills as preparation for a northern invasion and counters by ratcheting up tensions. 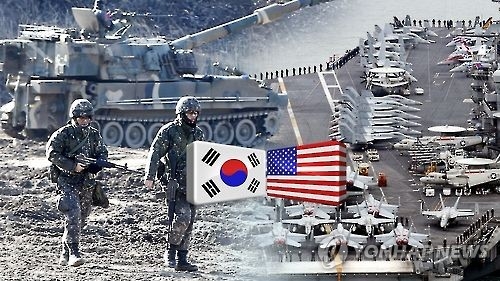 They also reaffirmed that the THAAD system will be installed "within this year." In November, U.S. Forces Korea Commander Gen. Vincent Brooks said the system can be deployed within eight to 10 months.

In July 2016, Seoul and Washington announced a plan to deploy a THAAD battery in South Korea by the end of this year.

The U.S. has repeatedly stressed that the system is defensive and aimed only at deterring North Korean threats. But China and Russia have strongly opposed the deployment, saying the move could hurt their strategic security interests.

Meanwhile, Seoul and Washington are "in talks to deploy U.S. strategic assets to the Korean Peninsula" during the exercises. The strategic assets may include the Nimitz-class supercarrier USS Carl Vinson Strike Group, B-52 and B-1B bombers, according to the ministry.

The allies will integrate a more specified "4D" anti-North operational plan into the exercises, which details the allies' pre-emptive military operations to detect, disrupt, destroy and defend against North Korea's evolving nuclear and missile capabilities, it said.

The concept of the 4D plan was first incorporated in the 2016 Key Resolve maneuvers.

Allies to hold drill as though THAAD already deployed

Allies to hold drill as though THAAD already deployed