Two cases of foot-and-mouth disease were confirmed at cattle farms in the southern part of the country this week, raising alarm against what could lead to mass culling if not contained quickly. The outbreak also raised questions after the government announced that very few of the cows at the infected farms actually had antibodies against the disease despite regular testing by state authorities. Officials said many of the farmers had skipped vaccination on fears of side effects on milking and giving birth by their cows, but the government came under fire for shoddy management.

"It is true that the existing testing system does not show the rate of antibody development for the full population of cows," Park Bong-kyun, head of the Animal and Plant Quarantine Agency, said in a briefing. "We will overhaul the method and cycle of the inspections."

The agency has been conducting tests annually since 2010 on some 9,500 cattle farms, about 10 percent of the nation's total. Farms for testing were picked regardless of their size, with only one cow selected for verification. If the cow had antibodies, then the farm was recorded as having a 100 percent rate of antibody development. Officials said that under such a system, only 0.3 percent of the entire cattle population had been subject to inspection.

Park said the agency will revise the system to test six cows per farm instead of just one and make detailed sampling to include cows of different genders and age. The tests will be increased to a maximum of four times a year from a one-time inspection, he said.

The agency said the problem of farmers' negligence remains despite the proposed changes. Cows need to be vaccinated every four to seven months, but farm owners tend to avoid it, fearing losses in milk yield and problems in impregnation and giving birth, it said.

"We can't dismiss financial losses from a cow's miscarriage, but an outbreak of foot-and-mouth disease will require culling of all cattle," Park said. "Since the losses from such culling will be far greater, vaccination is imperative." 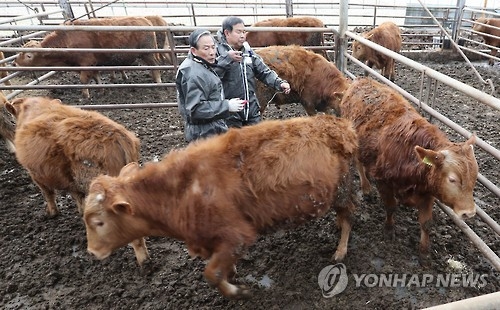