SEOUL, Feb. 8 (Yonhap) -- President Park Geun-hye has yet to make an appearance at her own impeachment trial, but speculation is rife that the time may be approaching with a Constitutional Court ruling in sight.

The president is not required to appear for hearings. Roh Moo-hyun, the last president to be impeached, never attended his trial in 2004 and was later reinstated.

Park has been accused of colluding with her friend Choi Soon-sil to extort money from conglomerates and neglecting her duty to save lives during a ferry disaster that killed more than 300 in 2014. Despite these and other charges that led to her impeachment, she and her lawyers have said her appearance at the Constitutional Court is not under consideration at present. 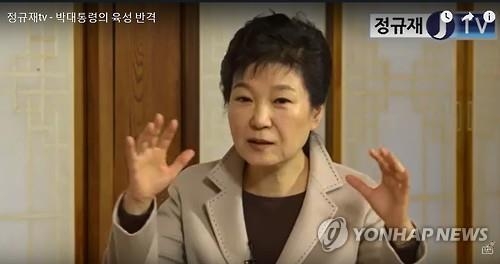 Instead, the president has sought to defend herself through meetings with the press. In an interview with online channel "Jeong Kyu-jae TV" late last month, the president made clear that the charges leveled against her were all lies, and alluded to the bias of the investigating team that looked into the scandal.

Meanwhile, the court has served as the battleground between Park's team of attorneys, the parliamentary panel serving as the prosecution, as well as witnesses and the justices serving on the bench.

On Tuesday, the court scheduled additional hearings through Feb. 22, effectively eliminating the possibility of a ruling this month. Expectations remain that the court will wrap up proceedings by March 13 before the retirement of acting Chief Justice Lee Jung-mi. Her departure will follow that of Chief Justice Park Han-chul, who retired at the end of last month, and leave the remaining seven justices to determine the president's fate.

To remove Park from office, at least six justices must uphold the impeachment.

"The president may make her final appeal to the people (in court) in order to prove her innocence," said one lawyer who spoke on the condition of anonymity.

Many have expressed skepticism that the court will schedule additional hearings in March given that all of the key witnesses will have testified under the current timetable.

In theory, Park could use an appearance at the court to prolong the proceedings beyond March 13 and heighten her chances of reinstatement.

Lee Joong-hwan, an attorney for Park, said the president will decide whether to attend the final hearing once the date is set.

A senior judge who wished to remain anonymous still cast doubt over the possibility of seeing Park in court.

"Would she want to come forward when she could be embarrassed in the courtroom?" he said. "I think the chances are low."