SEOUL, Feb. 8 (Yonhap) -- The Ministry of Health and Welfare has begun to review whether to punish a group of doctors for publicly posting a photo of them posing with a cadaver during training for surgical techniques, ministry officials said Wednesday.

The five medical professionals, including an orthopedic surgeon from an unspecified university hospital, posted the photograph on the Internet Tuesday after taking part in a cadaver dissection workshop at a Seoul hospital on Saturday, drawing flak from the general public.

One of the five, the chief of a rehabilitation hospital in the southwestern city of Gwangju, wrote with the photo that "Saturday's workshop was very useful and stimulating." The post caused netizens to criticize them for lacking respect toward a dead body.

In response to the public outcry, the ministry is reviewing whether they violated a law on dissecting and preserving cadavers, which demands that people who dissect all or part of a dead body pay due respect.

"If the revelation of their act proves to be the case, a health center governing the hospital could slap them with a fine, after launching a probe into the incident," said Hang Eui-soo head of the ministry's life ethics policy department.

The ministry plans to instruct health centers around the country to strengthen the management of cadavers and give administrative guidelines on the law to general hospitals where the dissection of cadavers frequently takes place. 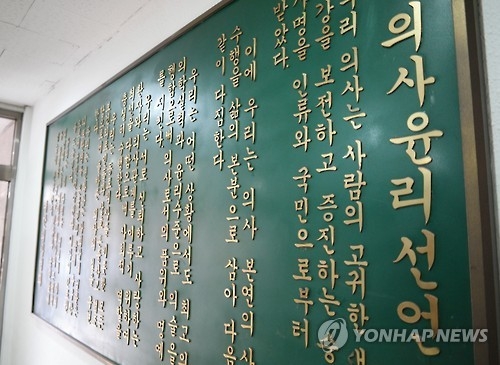