SEOUL, Feb. 8 (Yonhap) -- Rules and rule modifications for the upcoming World Baseball Classic (WBC) were announced on Wednesday, with the start of the tournament about a month away.

The tournament organizers announced the details on its website. Among the notable rules is the introduction of the tiebreaker game in the first two rounds.

There are four teams in each of four pools in the first round, with the top two nations from each moving on to the next stage.

If three teams are tied at one win and two losses, tiebreaker rules will rank the three, and then the first two ranked teams will play a tiebreaker game, with the winner advancing to the next stage.

If the first two-ranked teams in a pool are tied in the winning percentage, then their head-to-head result in that round will determine the pool winner.

The WBC will also have new extra-inning rules. Starting with the 11th inning, the team at bat will start with runners on first and second base. At the 2013 WBC, this rule kicked in for the 13th inning and beyond. 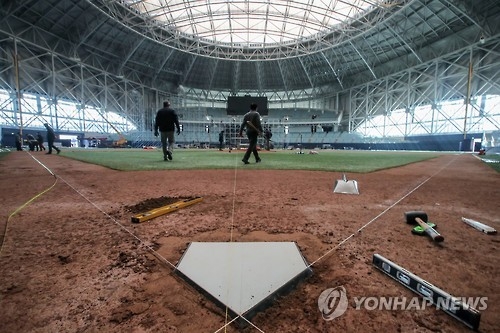 The WBCI also created a designated pitcher pool. Teams may set up a pool of 10 pitchers eligible for one or more consecutive rounds. For teams to reach into that pool, they must include up to two pitchers from the pool in their final roster. After each round, any pitcher from an advancing team's designated pitcher pool may be replaced on the final roster with another pitcher from the pool. Once the pitcher is removed from the final roster, he may not be added back to the team.

As for video replays, only plays involving home runs and potential home runs will be reviewable in the first two rounds. For the semifinals and the final, the same replay review rules as those used in a Major League Baseball season will apply -- covering, among others, ground-rule doubles, fair-foul calls, catch-trap calls and force plays at all bases -- with the exception of manager challenges.

Also, a pitcher must rest for at least four days if he throws 50 or more pitches, and for a minimum of one day if he tosses at least 30 pitches. Those who take the mound on back-to-back days have to sit out at least one day.

South Korea will be hosting first round action for Pool A at Gocheok Sky Dome in Seoul. It will open the tournament against Israel on March 6, and face the Netherlands on March 7 and finally Chinese Taipei on March 9.