The late night Friday show has hired Jeon So-mi of now-disbanded project team I.O.I and Gong Minzy of 2NE1, which also officially broke up in November. 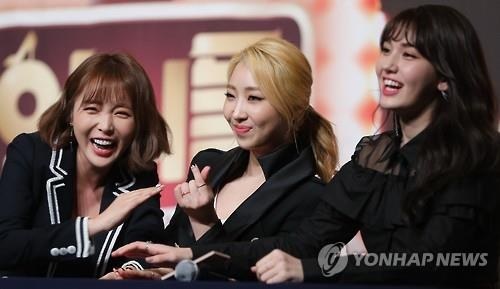 Trot singer Hong Jin-young, actresses Han Chae-young and Gang Ye-won are also on board, while comedian Kim Sook and model Hong Jin-kyung are returning from season one.

"Since season one, I wanted to make a documentary on what its like to live as a girl group member in South Korea. The more we showed the behind-the-scenes story of female stars (in season one), I became more curious and that entire world seemed very different," said Park In-seok, the show's director, at a media event held in western Seoul.

"Sister's Slamdunk" first premiered on April 2016, with the first season lasting until December. It featured six female celebrities working together to achieve their personal dreams, including an idol project realized through the one-off group "Eonnies," meaning elderly sisters in Korean.

Director Park believed an idol group project was a "good event" not just for professional singers but also for actresses without experience in reality or variety television.

"We're not just sticking to what worked well in season one but wanted to show viewers the variety of girl group tales that we weren't able to show in season one."

Gong and Jeon are two of the youngest cast members. But they're clearly the most experienced in idol artistry.

"Doing a girl group is about making it through difficult times together. The process of not just learning but creating dance moves myself has become a new challenge," said Gong.

When asked why she joined the gang, Jeon said it was too good an opportunity to pass up.

"I don't think I'll ever be able to do a girl group with these members," she explained on her reasons for joining the show, but also added she doesn't think it will necessarily be an easy process.

Kim Sook, returning face and oldest of the bunch, was thankful for the show continuing.

"The fact that a 'female entertainment show' was entering a second season is moving in itself. I want to thank the viewers," said Kim.

A newcomer to reality TV, actress Han Chae-young said she has so far enjoyed filming and looked forward to the show.

"I like our members and also have high hopes. I was initially worried that living together with seven women would be difficult but I enjoyed filming as it was just like hanging out."

Season two of "Sister's Slamdunk" is set to premier Friday on KBS 2TV. 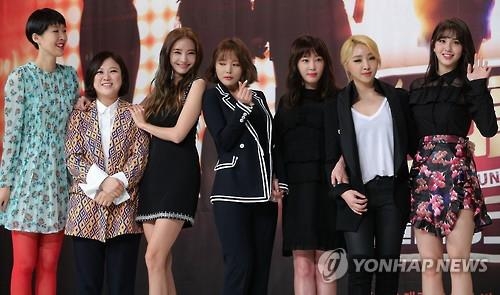