Cho, formerly national artistic gymnastics head coach, is now in charge of the South Korean aerial ski team currently preparing for the International Ski Federation (FIS) Freestyle Ski World Cup in PyeongChang, Gangwon Province, some 180 kilometers east of Seoul. The FIS competition, which starts on Friday at Bokwang Snow Park, is one of the test events for the 2018 PyeongChang Winter Olympics.

In aerials, athletes ski off two to four meter jumps that propel them up to six meters in the air and perform twists and turns before landing on a hill. Because of the sport's characteristics, aerial skiing is compared to vault in artistic gymnastics.

Cho was a well-known coach in artistic gymnasts. In 2012, he helped Yang Hak-seon win the gold medal in the men's vault at the 2012 London Olympics and received a coaching award from the South Korean Olympic body the same year.

Cho said switching his career from gymnastics to aerial skiing isn't necessarily special because there are already so many former gymnastics coaches in this freestyle skiing discipline.

"The principle of aerial movements is the same anyways," Cho said on Wednesday. "People say aerial skiing is similar to vault, but the principle of skiers going up into the air is actually more similar to high bar."

The 69-year-old coach said since aerial skiers can fly as high as 15 meters in the air, they have more time to show their tricks than gymnasts in bars who usually go up to 2.5 meters. When asked his famous pupil Yang can pull off aerial skiing, Cho simply said: "Yes, he will do well."

Cho joined the South Korea aerial ski team in October 2015 with four skiers. But three skiers left the team later and Cho had to recruit two other athletes last August.

"For this World Cup, we think participation itself is already a meaningful result," he said. "In summer, we trained by diving into the waters, so we didn't have much time on the snow."

Cho said the current national team members should be called "pioneers," and noted their efforts to lead aerial skiing development for the future.

"In any sports, it's difficult for a pioneer to win medals," he said. "First, we need to create a boom for this sport, support young athletes and set up infrastructure. For now, it's difficult to recommend this sport to others, but if we can do well in those processes, I believe our athletes can post good results at the next Olympics." 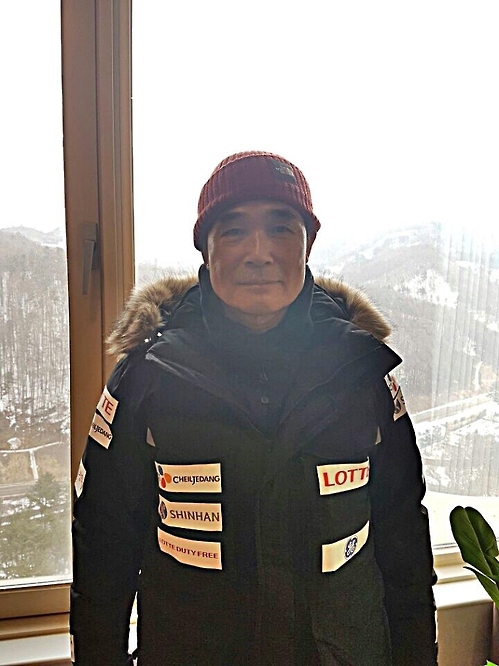