WASHINGTON, Feb. 8 (Yonhap) -- Three weeks into office, U.S. President Donald Trump has spoken with many world leaders, and one fixture sentence that appeared in every White House readout of his calls with NATO member nations is "the importance of all NATO allies sharing the (monetary) burden of defense spending."

Beginning with his Jan. 28 call with French President Francois Hollande, Trump has made it a rule to ask for more burden sharing in conversations with Italy's Prime Minister Paolo Gentiloni on Feb. 4, NATO Secretary General Jens Stoltenberg on Feb. 5 and Spain's Prime Minister Mariano Rajoy on Feb. 7.

And in his first address to American troops in Florida earlier this week, Trump called for the NATO members "make their full and proper financial contributions to the NATO alliance," saying many of them have not been even close to meeting their obligations.

So much so that a senior administration official was quoted as telling Politico that Trump appears to be "obsessing over money." The unidentified official was also quoted as saying that at one point during Trump's call with the French president, he said the U.S. "wants our money back."

It's pretty clear that imposing more burden sharing is Trump's No. 1 priority in his dealings with NATO nations.

But that compares with the lack of any mention of such a demand for South Korea and Japan, the so-called wealthy nations that Trump heavily criticized on the campaign trail for not paying enough for American troops stationed in those countries.

Without making such a demand, Trump has instead expressed his full support for the alliance with Seoul, reiterating his "ironclad" commitment to defending the ally, including through the provision of extended deterrence, using the full range of military capabilities, when he spoke with South Korea's Acting President Hwang Kyo-ahn on Jan. 29.

His defense secretary, Jim Mattis, also made no mention of the demand for more burden sharing when he visited the South in his first overseas trip since taking office. His visit underlined the seriousness with which the U.S. takes threats from North Korea and the importance of the alliance with Seoul to deal with them. 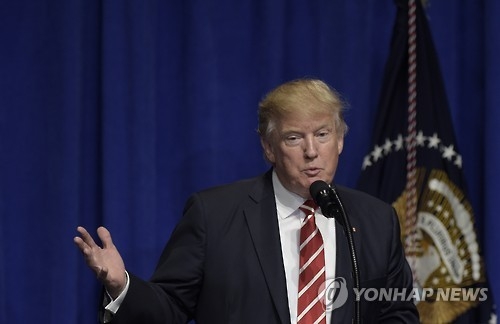 Some say Trump's growing calls for NATO to pay more could be seen as a sign that he's gearing up to make a similar demand for the South soon. But many American experts say that NATO and South Korea are different in many aspects, including the fact that dealing with North Korean threats takes a higher priority than burden sharing in the alliance with Korea.

"I believe that such a request will come, but the looming threat from North Korea and the need for strong alliance coordination to deal with that challenges is the most important priority, whereas the threats to NATO are coming in a different form than the threat from North Korea," said Scott Snyder, chief Korea analyst at the Council on Foreign Relations.

Trump appears to understand the seriousness of North Korean threats.

During their first meeting just days after the November election, then President Barack Obama reportedly warned Trump of the dangers the North poses to the U.S. The first intelligence briefing Trump asked for since the election was also about North Korea, according to media reports.

And after North Korean leader Kim Jong-un threatened to test-fire an intercontinental ballistic missile apparently capable of striking the U.S., Trump said such a thing "won't happen," though he didn't say how he will prevent it.

Robert Manning, a senior analyst at the Atlantic Council think tank, noted that South Korea has already been paying way more for American troops than what NATO nations do, though that does not mean Trump won't push the South to pay more.

"I think NATO is in a separate category from the ROK or Japan. Trump is not wrong: only a handful our NATO allies are meeting their defense obligations -- 2 percent of GDP on defense. In contrast, our host nation agreement with the ROK has Seoul paying about 50 percent of total costs of US troops in Korea (If he brought them home, it would be much more expensive) as well as recent base relocation costs," Manning said.

Still, Manning said that Trump will ultimately make the demand for Korea as well.

"The host nation agreement expires toward the end of 2018, so I expect we will begin negotiations on it this fall. And I would expect Trump to push for the ROK contributing more," he said.