The Korea Baseball Organization (KBO) said players from the league's 10 clubs will make 239.8 million won (US$209,345) on average, up from the previous record of 216.2 million won from last season.

The figure counts the salaries of the 27 highest-paid players of each club, excluding each team's foreign players, who are paid in U.S. dollars.

Lee Dae-ho, former Seattle Mariners first baseman who rejoined his former KBO club Lotte Giants last month, will be the highest-paid player in the league, with an annual salary of 2.5 billion won. 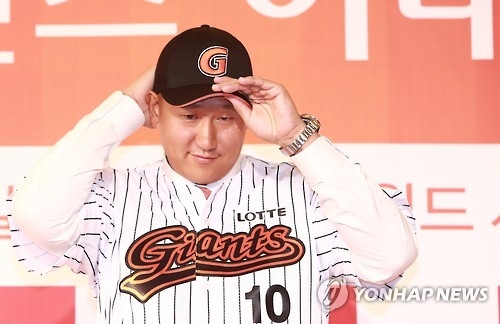 Among the foreign players, the Doosan Bears right-hander Dustin Nippert will make the most money this season with $2.1 million. He's also the highest-paid foreign player in the KBO's 35-year history.

As for teams, the Hanwha Eagles had the highest average salary for their top 27 players with 341.6 million won. Two other clubs surpassed the 300 million-won mark -- the Kia Tigers with 318.4 million won and the Lotte Giants with 307.1 million won.