SEJONG, Feb. 9 (Yonhap) -- South Korea will build 240 electric vehicle (EV) charging stations at shopping malls and railway stations by the end of 2017 as a way to expand infrastructure for green cars in urban areas, the government said Thursday.

According to the Ministry of Trade, Industry and Energy, 230 EV super chargers will be established at large discount store chains, including E-Mart and Homeplus, in Seoul and other major cities, while 10 will be set up at commuter train stations.

People can enjoy shopping when their cars are being plugged, added the ministry. It takes at least 30 minutes to have an EV fully charged.

"The government will expand EV charging spots to department stores and movie theaters," the ministry said. "It will help people use electric cars in an easier, more convenient way."

It said it will double the number of regular EV chargers to around 20,000 throughout the country within this year, with an additional 2,500 rapid chargers.

It is part of the South Korean government's long-term scheme to transform the country's car manufacturing sector into an eco-friendly one. 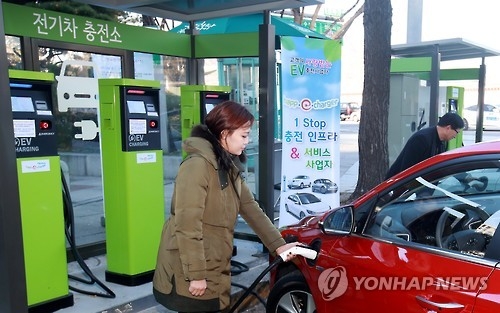 S. Korea to build 240 electric chargers at outlets, stations in 2017

S. Korea to build 240 electric chargers at outlets, stations in 2017