SEOUL, Feb. 9 (Yonhap) -- The head of a major business lobby in Seoul on Thursday urged the government to further remove unnecessary regulations governing the country's labor market, saying they are preventing the creation of new jobs across all industrial sectors.

Bahk Byong-won, chairman of the Korea Employers Federation (KEF), also called on the government to stop producing what he called budget-wasting jobs.

"The government is creating jobs that spend money because it is unable to create quality jobs that generate money," he said at an annual meeting of the business lobby held at a Seoul hotel.

Bahk claimed such jobs could not last, apparently due to limited government resources.

"How could jobs that require a budget last long when the number of jobs that generate income and pay taxes is not growing," he asked.

The KEF chief insisted the reason the number of quality jobs is not growing is because of rigidity in the country's labor market, which he claimed is created and maintained by strict labor and employment laws.

"What are preventing new quality jobs across all industrial sectors are rigid labor laws," he said. 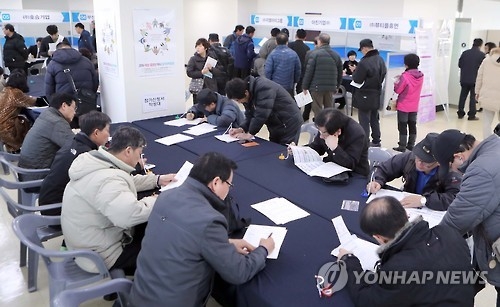 Bahk argued such laws were also holding the country back in competition with other countries, including China.

"The country cannot but lose to a country where nothing is impossible because nothing is possible in this country and nothing is free from regulations," he said, according to the KEF.

The KEF chief also turned on workers themselves, noting their desire to secure their jobs and even extend their working hours for greater gains may be preventing their own children from finding new jobs.

"Reducing working hours even by a little each year and allocating additional resources left by such a reduction for youth employment is a task this country can no longer afford to avoid," he said.

As of end-December, South Korea's jobless rate for people aged between 15 and 29 years stood at 8.4 percent, while the figure for the entire population was at 3.2 percent.
(END)