SEOUL, Feb. 9 (Yonhap) -- A former South Korean unification minister said Thursday the now-shuttered inter-Korean industrial complex needs to be reopened, with the closure of the park entering the first year this week

"I think the complex should be reopened," said Ryoo, who served as the country's point man on North Korean affairs from 2013-2015 under the current Park Geun-hye administration.

Friday marks the first anniversary of Seoul's shutdown of the complex in North Korea's border city of Kaesong in response to Pyongyang's nuclear and missile tests early last year.

South Korea did not close the factory zone even when North Korea staged deadly attacks against the country in 2010. But in April 2013, Pyongyang abruptly shut it down for about five months, citing what it called heightened tension sparked by a joint military drill between Seoul and Washington.

Ryoo said it is regrettable that the complex was shut down, given that the government made an effort to resume operations in 2013. 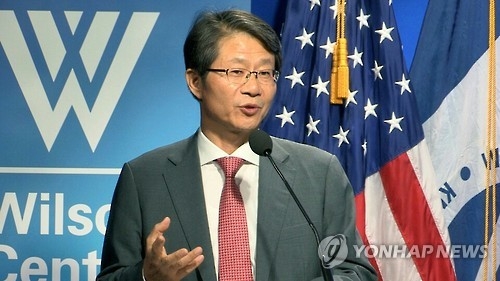 The former minister said that he suspects the existence of a behind-the-scenes power broker as the decision-making process at the National Security Council (NSC) did not appear to smoothly go.

His remarks appear to be aimed at Choi Soon-sil, who is the long-time friend of President Park and is at the center of the corruption scandal that led to Park's impeachment in December.

Choi, who holds no government post, allegedly received and edited drafts of presidential speeches before they were publicly delivered.

"Major decisions over diplomacy, security and inter-Korean affairs are made at sessions of the NSC," he said. "After the NSC's session, details over policy are decided, but this process did not seem to proceed smoothly."