In December, the Defense Acquisition Program Administration (DAPA) placed a 150 billion-won (US$130 million) order with Hanjin Heavy Industries Co. to build two hovercraft landing ships, with a goal of delivering them to the Navy by 2020, not by the originally 2021 date, DAPA said in a statement.

"If the hovercraft landing ships are deployed in 2020, the Navy's operational capabilities will receive a boost amid growing tensions from North Korea," a DAPA spokesman said.

Moreover, the order will stimulate the flagging shipbuilding industry in the southern port city of Busan, home to Hanjin Heavy, he said.

In 2007, Hanjin Heavy delivered two landing ships to the Navy in a 104 billion-won deal, according to DAPA.

South Korea's military has stepped-up efforts in recent years to enhance its defense capabilities to counter the North's evolving nuclear and missile threats.

Local shipyards have been reeling from a sharp decline in new orders and an oversupply in global markets after being hit hard by the 2008 financial crisis. Some of them have cut jobs and sold noncore assets to stay afloat with many engaged in self-rescue programs. 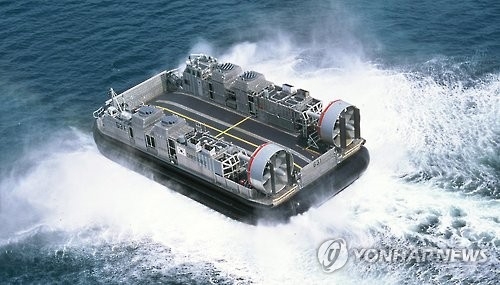 S. Korea to speed up delivery of hovercrafts to help shipbuilders

S. Korea to speed up delivery of hovercrafts to help shipbuilders