The tournament organizers created the pool for this year's edition, allowing teams to select up to 10 pitchers for the pool. They are eligible for one or more consecutive rounds.

The pool includes left-handed starter Yoo Hee-kwan, a 15-game winner in the 2016 Korea Baseball Organization (KBO) season with the Doosan Bears, and Kim Se-hyun, the closer for the Nexen Heroes who led the KBO with 36 saves last year.

Despite his strong KBO credentials, Yoo was left off the final roster because he won't blow anything by hitters.

The Korean team's pool also has Jung Woo-ram, a veteran closer for the Hanwha Eagles, and Shin Jae-young, the reigning KBO Rookie of the Year for the Heroes who went 15-7 in 2016.

The 28-man final roster includes 13 pitchers, eight of them right-handers. 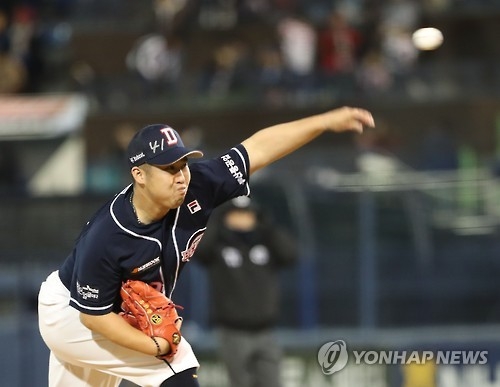 The WBC will impose pitch-count limits to protect the hurlers, since the tournament is held before the start of professional seasons in places like South Korea, Japan and the United States.

Also, a pitcher must rest for at least four days if he throws 50 or more pitches, and for a minimum of one day if he tosses at least 30 pitches. Those who take the mound on back-to-back days have to sit out at least one day.

South Korea will be hosting first round action for Pool A at Gocheok Sky Dome in Seoul. It will open the tournament against Israel on March 6, and face the Netherlands on March 7 and finally Chinese Taipei on March 9.