SEOUL, Feb. 9 (Yonhap) -- Acting President and Prime Minister Hwang Kyo-ahn on Thursday ordered quarantine authorities to finish vaccinating all cows this week, amid the spread of foot-and-mouth disease reported in the country earlier this week.

Hwang made the remarks a day after another infection was confirmed in Yeoncheon, 62 kilometers north of Seoul, following two cases reported in central North Chungcheong Province and southwestern North Jeolla Province on Monday and Tuesday, respectively.

"I call for all-out efforts with a sense of urgency since initial quarantine efforts are critical to stem the spread of the disease," Hwang said during a regular meeting of Cabinet ministers on pending state affairs. 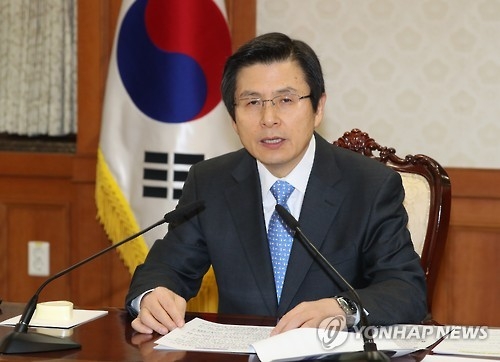 On Wednesday, the government began a campaign to vaccinate 3.14 million cows across the country and set aside a budget of 5.34 billion won (US$4.65 million).

During the meeting, Hwang also urged the government to strive harder to help the agriculture, fishery and livestock industries, which have been suffering from flagging domestic consumption, expanding their footholds overseas and developing new products to bolster their sales.

The acting president also noted the need to transform the agriculture and fishery industries into future-oriented technology-based sectors that can help create jobs and new business opportunities for entrepreneurs.