SEJONG, Feb. 9 (Yonhap) -- The recovery momentum for the South Korean economy has remained fragile as an upturn in exports and investment was offset by a drop in private consumption, a government report said Thursday.

"The South Korean economy saw investment improve on the back of recovering exports, but a slump in consumer sentiment and private consumption slowed down the recovery pace," the finance ministry said in its monthly economy assessment report called the "Green Book."

It said the production side showed some signs of gaining ground led by a rebound in exports and investment.

Exports jumped 11.2 percent in January from a year earlier, marking the first double-digit on-year growth in four years, on a rise in semiconductors and petroleum products. Facility investment rose 3.4 percent on-month for the third consecutive month in December on brisk demand for machinery investment from semiconductor businesses.

Industrial output edged down 0.5 percent on-month in December, compared with a 3.6-percent leap in the previous month, due to a sharp drop in electronics components and processed metals. 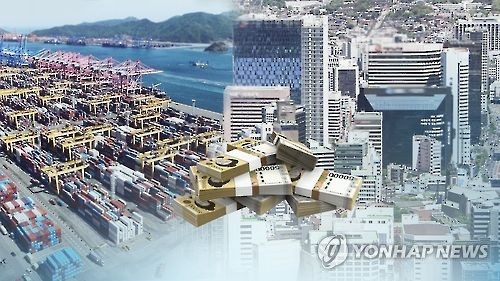 On the other hand, retail sales fell 1.2 percent in December from a month earlier, as rapidly rising oil prices and grocery prices dampened consumer confidence.

Moreover, the composite consumer sentiment index for January came to 93.3, the lowest since March 2009 when it stood at 75 in the aftermath of the global financial crisis.

The finance ministry said it will aggressively implement expansionary fiscal policy this year to deal with the external and internal pressures and revive the economic momentum and consumer sentiment.

"Despite a recovery in exports, the South Korean economy will face larger uncertainties at home and abroad," said the ministry. "The government will make full efforts to improve the economy and employment."