Lee, who won the gold medal in mixed doubles at the 2008 Beijing Olympics, will marry actress Byun Soo-mi, whose stage name is Han Soo-hyun, an official with the Yonex badminton club said.

The official added the athlete-actress couple will have a private wedding ceremony, but the exact date and location are still unknown.

Lee and Byun have been dating since 2012. The couple is expecting a baby this spring, according to the official.

Lee is one of the top badminton stars in the men's and mixed doubles. After his gold medal performance in Beijing in 2008, he took the bronze medal in the men's doubles at the 2012 London Games.

Lee announced his national team retirement last year after he and his partner Yoo Yeon-seong got eliminated in the men's doubles quarterfinals at the Rio de Janeiro Olympics.

The 28-year-old is currently focusing on playing in professional badminton leagues in Southeast Asian countries. 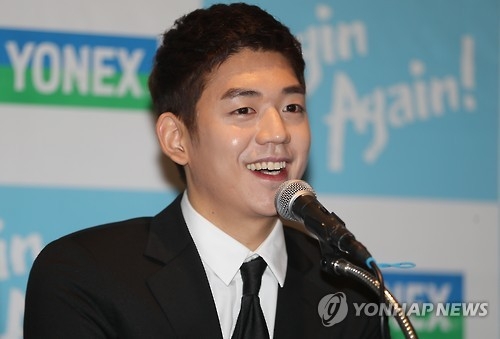