Tillerson made the remark in a written answer to questions from Sen. Ben Cardin (D-MD) before his confirmation as secretary, responding to a question whether he would be willing to pull U.S. troops out of South Korea and Japan unless a "fair" burden-sharing agreement cannot be reached.

"Japan and South Korea already contribute large amounts to support U.S. forces in their respective countries, and I am optimistic that future discussions will continue to be productive and result in equitable burden-sharing arrangements," Tillerson said.

"Our shared alliances form the foundation for security in Northeast Asia and beyond, so we must strengthen and modernize these alliances to manage growing regional and global challenges," he said. 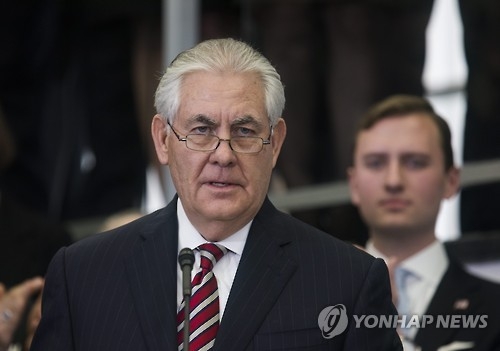 During the campaign, U.S. President Donald Trump portrayed alliances as something the United States can abandon unless they make economic sense and urged allies to pay more for American troops stationed in those countries to help protect them.

He had argued it makes no sense for the U.S. to pay to protect wealthy nations like Japan and Korea.

Since his election, Trump kept up the burden-sharing demand for NATO nations but made no mention of such a demand for South Korea while only expressing his support for the alliance with Seoul and reiterating his "ironclad" commitment to defending the ally.

Experts say that NATO and South Korea are different in many aspects, including the fact that dealing with North Korean threats takes a higher priority than burden sharing in the alliance with Korea, though that does not mean Trump won't push Seoul to pay more.