SEOUL, Feb. 9 (Yonhap) -- As many as 60,000 North Koreans plan to hold a mass rally near Mount Paektu on the border with China on the birthday of the late leader Kim Jong-il next week to pay allegiance to the ruling Kim family, a U.S. broadcaster said Thursday.

A source in the northern Yanggang Province told the Radio Free Asia (RFA) that North Korean youth and students, and residents will take part in a series of political events, including the rally in the province's border town of Samjiyon on the birthday, which falls on Feb. 16.

Samjiyon is located on the southeastern slope of the volcanic mountain, which has long been regarded as the mythological birthplace of the Korean people. For North Koreans, the mountain, the highest on the Korean Peninsula, is also regarded as the home of their revolution and as a sacred site.

Pyongyang has long claimed that the late leader was born in Samjiyon, although he is known, in reality, to have been born in Russia's far eastern Khabarovsk.

The area is also propagandized as the sacred origin of the Korean revolution initiated by North Korea founder Kim Il-sung.

The North, which installed a statue of Kim Jong-il in the town in September last year, has been spurring the development of the region, including remodeling public buildings, and building a military stadium and factories, to follow the current leader Kim Jong-un's instructions. 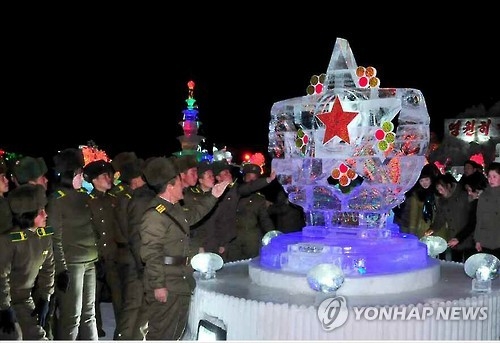