SEOUL, Feb. 9 (Yonhap) -- Most leading conglomerates in South Korea have yet to finalize their hiring plans for this year, making university graduates and other young jobseekers jittery, sources said Thursday.

Amid a prolonged economic slump and the fallout from a massive corruption scandal, many family-controlled business groups are still working on employment plans for 2017, with some feared to cut the number of new employees.

Top conglomerate Samsung Group and most other big employers in the country hold two hiring events -- one in March and the other in September -- to accept those graduating in such seasons.

As the outlook for big firms' employment remains iffy, experts said, college graduates and young jobseekers should tap into other job opportunities instead of only trying to apply for their regular hiring events.

According to a survey on 378 companies, taken by online job portal Saramin late last year, nearly 62 percent of the respondents said they would pick new employees through nonregular hiring events this year, with only 13 percent saying they plan to take in new workers via regular events.

South Korea's job market remains tough for university graduates and first-time jobseekers due mainly to the longstanding sluggishness of Asia's fourth-largest economy. The unemployment rate for young people, aged between 15 and 29, reached a record high of 9.8 percent last year.

In addition, many large companies are still smarting from their involvement in the graft and influence-peddling scandal revolving around President Park Geun-hye and her longtime ally Choi Soon-sil. Capitalizing on her ties to Park, Choi is accused of pressuring 53 big businesses into donating about 80 billion won (US$69.8 million) to two controversial foundations. 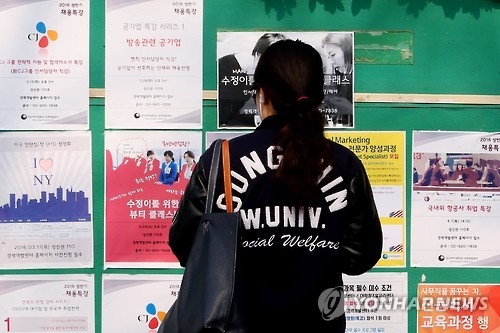