SEOUL, Feb. 9 (Yonhap) -- South Korean actress Han Chae-young attended a promotional event for the upcoming reality TV show "Sister's Slamdunk" and expressed determination to explore new sides of herself in her first attempt to sing and dance on stage.

"I really have no sense of music, and I don't dance well. My husband even told me that I can't keep a rhythm. But everyone has goals, right?" the actress said Wednesday at a media event for the show's second season held at Time Square Mall in western Seoul.

"By the end, I want to be at the center when our band performs."

The all-women reality show first premiered in April 2016, with the first season running until December. It featured six celebrities working together to achieve their personal dreams, including an idol project realized through the one-off group "Eonnies," meaning older sister in Korean.

Han, who debuted in 2000, is known for her roles in hit Korean dramas, such as "Autumn in My Heart," "Delightful Girl Choon-Hyang," "Only You," "Fireworks" and "Pretty Man." Dubbed by the press "Baribe doll" for her glass-bottle figure, Han has also been in numerous commercial endorsements.

The KBS 2TV's late night show is set to premiere on Friday. 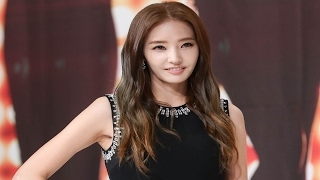