SEOUL, Feb. 9 (Yonhap) -- An incentive-oriented approach will not help the world reach its goal of getting North Korea to give up its nuclear weapons, a high-profile defector who served Pyongyang said Thursday.

"We should not think that giving incentives to North Korea will help resolve Pyongyang's nuclear issue," Thae Yong-ho, a former diplomat who arrived in South Korea last year, told a forum in Seoul.

He was at the gathering as a panelist, a first for him since his defection.

Thae said that no matter how appealing incentives are, North Korea will not accept them if Pyongyang judges they do not benefit the one-man rule of its leader Kim Jong-un. 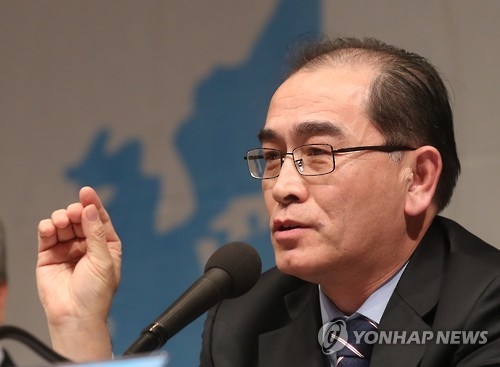 The North's leader would not step down even if the United States and South Korea staged preemptive strikes against Pyongyang, he claimed.

"North Korea's leader won't back off. A preemptive strike against North Korea will bring about a huge catastrophe," Thae said. "Before it happens, we should remove Kim Jong-un."

His remarks came as some U.S. congressmen and experts claim that a preemptive strike and regime change could be among options in deterring North Korea's nuclear aspirations.

Touching on the 1994 U.S.-Pyongyang agreement to resolve North Korea's nuclear issue, Thae claimed there was no one in North Korea who thought the Agreed Framework would be implemented.

The 1994 deal, also known as the Geneva Agreement, called for Pyongyang to freeze its nuclear activities in return for light water reactors and oil, as well as a gradual normalization of diplomatic ties between the two countries.

He said that the agreement came into being because the North's leader calculated that the country needed time and breathing room to stay afloat amid the prolonged economic hardship in the 1990s, commonly called the Arduous March.

For the U.S., the deal seemed to give Clinton the time to "manage" the North's regime without causing chaos, as he apparently believed North Korea would soon collapse.

Thae's participation in the forum, meanwhile, marked a change for him since he began public activities in earnest starting in late December.

In the past, he held closed-door sessions with lawmakers and press conferences and interviews with local and foreign media.