(ATTN: UPDATES with testimonies of other witnesses in last 5 paras; RECASTS para 4)

Moon was indicted on charges of pressuring the National Pension Service, a key shareholder of Samsung C&T, to agree to the merger. In return, Samsung is suspected of offering large "donations" to two nonprofit foundations linked to Park's friend Choi Soon-sil.

The former minister and current NPS chief, who has admitted to the charges, denied during the hearing that he acted on orders from the presidential office. 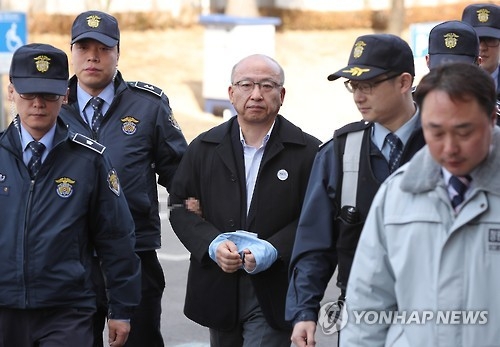 It also summoned three of Choi's associates to give separate testimonies on how the president's confidante operated the K-Sports Foundation, one of the two organizations supported by Samsung, and its alleged affiliate Blue-K.

Jo Seong-min, former head of Blue-K, testified that he determined based on circumstantial evidence that there was a connection between Choi and the president.

"When I submitted work or research proposals upon Choi's orders, she inserted my business card into the front cover and took them somewhere," he said. "Afterwards, I would receive phone calls from the senior presidential secretaries for education or economic affairs."

Park Heon-yeong, a director at the foundation, said later that Choi showed him classified government documents, including an itinerary of the president's overseas trips.

"In 2015, Choi showed me the culture ministry's budget proposal for 2016 and explained in detail how much of it we could spend," he said.