Lotte confirmed that it closed down its flagship store on Tmall, a business-to-consumer online mall operated by Alibaba Group, as of Jan. 12.

"We express our appreciation again to those who have shown interest in the Lotte.com flagship shop," the group said in a statement.

Tmall is one of the biggest online shopping sites in China, with each flagship shop speaking for the credibility of its operator.

"Withdrawing such a shop could affect the company's online business," one of the sources said.

Seoul-Beijing relations have grown tense after South Korea decided to host an advanced U.S. missile defense shield system, known as THAAD, on its soil. The system is scheduled to become operational within this year. Beijing fiercely opposes the deployment, seeing it as a challenge to China's national security. 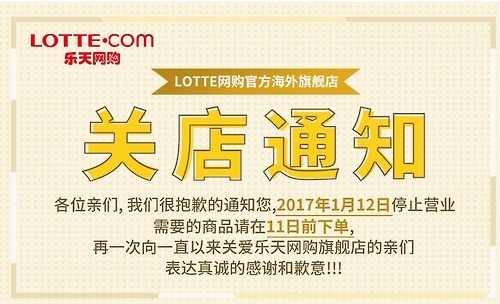 Lotte Group is providing the host site for THAAD, exchanging a golf course with a plot of military land. After the plan was made known, China has been taking what apparently are retaliatory actions against South Korea. China has turned back a number of South Korean exports, including popular cosmetic products, while canceling appearances by South Korean entertainers.

Officials at Lotte denied its decision was linked to such issues. "We withdrew because the sales did not meet our expectations," an official said. "It has no relevance with THAAD."

Lotte, however, has been one of the hardest hit businesses by the diplomatic row. China on Nov. 29 last year started tax audits and sanitation-safety inspections on all Lotte businesses operating in China. The construction of a Lotte World indoor theme park in Shenyang, which was included in the inspections, was halted in December.

The construction, which began in 2008, is part of the 3-trillion-won (US$2.61 billion) Shenyang Lotte Town project.

The conglomerate also recently closed three of its supermarket chain branches in China, although officials said it probably has to do with their sales performance.
(END)