The group has established itself in the K-pop scene by fusing pop and hip-hop. Imagine NSYNC mixed with Wu-Tang Clan and you get Block B.

Dubbed "Gossipnam," a word made up of the first syllables from the phrase "desirable man" in Korean, Zico became Block B's first member to achieve solo fame outside of the group. With his signature lover boy bravado and streetwise swagger -- as opposed to the generic sweet boyfriend facade of other boy groups -- and with pure musical prowess and artistry, Zico has become a heartthrob to young K-pop fans over the last few years.

Now Block B has regrouped for "Yesterday," with Park taking on a key role. Written by Park, the song, in terms of rhythm, takes a cue from shuffle music. Lyrics co-written by Zico and Park are about a man becoming insecure about his jaw-dropping girlfriend, who is innocent on the outside but, in fact, a femme fatale by nature. 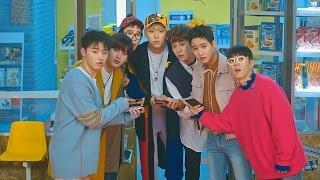