GANGNEUNG, South Korea, Feb. 9 (Yonhap) -- The chief organizer of the 2018 PyeongChang Winter Olympics in South Korea said Thursday he is counting on Russia to clean up its doping problems in time to compete here next year.

Lee Hee-beom, president of the PyeongChang Organizing Committee for the 2018 Olympic & Paralympic Winter Games (POCOG), said at a press conference in Gangneung that he understands Russia has been taking steps so that it can return to international competition.

Russia's track and field team, and its entire Paralympic delegation were banned from the 2016 Rio Olympics due to state-sponsored doping.

"I believe Russia will be able to compete in PyeongChang, and that its athletes will demonstrate their skills," Lee said at Gangneung Hockey Centre in Gangneung, Gangwon Province, where the Olympic organizers marked the one-year countdown to the next Winter Olympics.

"We'll do our best to make both the Winter Olympics and Paralympics clean competitions," Lee added.

Lee insisted that any peace-loving nation has the right and obligation to take part in the Olympics, because the modern Olympics was created as a symbol of peace. 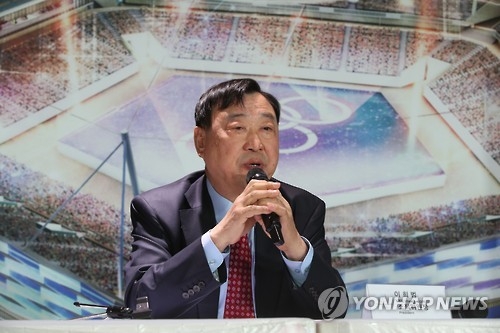 And by the same token, the doors are open to North Korea as well, Lee added.

"We'll welcome any peace-loving country, and North Korea will be no exception," he said. "And if North Korea does decide to compete here, we'll take any steps necessary to accommodate its athletes."

Lee also said the massive domestic political scandal, involving President Park Geun-hye and her longtime confidante Choi Soon-sil, will not have any negative impact on the Olympic preparations.

"I know people have expressed concerns about the current political situation and how it might affect the Olympics," Lee said. "But it hasn't had any impact on our preparations."

Lee said PyeongChang is expected to be the largest Winter Games ever, with 102 gold medals at stake, up from 98 at the 2014 Sochi Winter Games. PyeongChang also hosted a record number of representatives during the chefs de mission meeting earlier this month.

"In terms of hardware, our venue construction is on schedule, and international winter sports federations have said our facilities are perfect," Lee added. "Over the next year, we'll try to improve our operational capabilities and any other aspect that needs an upgrade."

S. Korea counting on Russia to clean up before PyeongChang 2018

S. Korea counting on Russia to clean up before PyeongChang 2018