The Seoul Metropolitan Government said it has approved the use of the 123-story Lotte World Tower in southern Seoul, which has long been a coveted dream of group founder Shin Kyuk-ho.

After the retail giant submitted a request for approval in December, the metropolitan government said it has carried out a number of tests, including on-site inspections and anti-disaster drills.

It consulted with dozens of relevant government departments to review whether the skyscraper was built in accordance with conditions and regulations.

An advisory panel composed of 21 experts and nearby residents checked a total of 188 criteria ranging from fire protection to environmental factors before the government made the final decision, it said.

Shin Dong-bin, the chairman of the group, will use the 70th and 71st floors for his office, industry sources said.

The tower will also contain the headquarters of major Asian companies between the 14th and 38th floors, they said.

Signiel, a six-star hotel that can accommodate world VIPs, will be built between the 76th and 101th floors.

Construction of the 555-meter building began in November 2010, with some 5 million workers mobilized.

Lotte is known to be planning to open the building for business in early April.

The city government expects the skyscraper to attract domestic and foreign tourists and create jobs.

The building is the world's fifth tallest at the moment. Its title as the country's tallest skyscraper will be taken by Hyundai Motor Group's new headquarters when it is built nearby in southern Seoul by 2021. 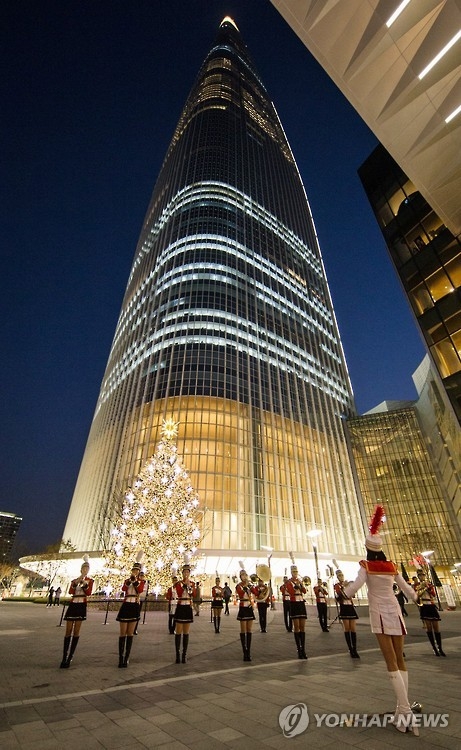