UIJEONGBU, South Korea, Feb. 9 (Yonhap) -- A second strain of foot-and-mouth that has been confirmed at a cow farm near Seoul is believed to have come from North Korea, the Gyeonggi provincial government said Thursday.

The A-type virus strain of the disease was discovered at the farm in Yeoncheon, 62 kilometers north of Seoul and near the border with the North, on the previous day, three days after the O-type virus strain was found in Boeun, central South Korea. A second infection of the O-type strain was confirmed at a cow farm in the southwestern city of Jeongeup on Tuesday.

Most cases of the disease that have hit South Korea have involved the O-type strain, except in 2010 when the A-type virus was found in six farms in Yeoncheon and nearby Pocheon.

The provincial government's belief that the disease spread from the North is based on two factors -- a northerly wind blowing this time of the year and wild animals passing north and south through the Demilitarized Zone (DMZ) separating the two Koreas.

The cow farm where the A-type virus strain of the disease was found lies just 10 kilometers away from the inter-Korean borderline. It is known that foot-and-mouth disease hits the North Korean border city of Kaesong around this time every year. 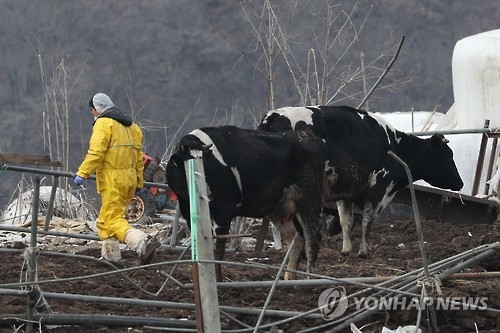 Scholars say the disease's virus can be borne on the wind for up to 250 kilometers and the wind blows from the north to the south in the winter season.

The regional government also refereed to another possibility of wild animals such as boar and elk in the DMZ moving in and out of the zone with the virus.

An epidemiological study showed the owner of the farm has no record of taking overseas trips recently, and the virus type is different from that of the farms in Boeun and Jeongeup, strengthening the belief of the virus coming from the North.

The local government, however, has no information on whether the disease has broken out in the North.

2nd strain of foot-and-mouth disease believed to have come via N. Korea

2nd strain of foot-and-mouth disease believed to have come via N. Korea